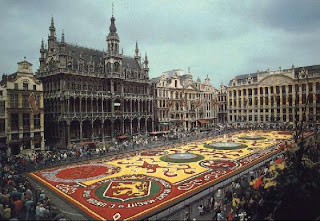 As Westminster MPs lick their wounds, their European counterparts grow ever more confident, says Boris Johnson. And because the great Boris says it, it must be true.

The point is, it has been true for a long time, but now the gifted scribe has noticed. Not quite yet has he realised that we now have a parliament that cannot even ban light bulbs – or un-ban them. That we have a government that cannot decide its agriculture or fishing policy. Or even decide how many wash basins there should be in a slaughterhouse.

But he has noticed that, increasingly, Brussels decides on financial services regulation. We could have told him that ... we told our readers that many moons ago. But the great Boris didn't notice – or didn't care. But now he does.

In truth, very little. Dave's Tories, like all Tories before them, will huff and puff, and roll over. Small wonder, Dave is finding it tough going - especially ooop North. Hundreds of miles from the Westminster bubble, they know a poser when they see one.

The EU issue and voting intentions are not directly related. In that sense, the pundits are right. The EU is not an electoral issue, in that people are actually thinking about Brussels when they vote. But what they perceive is an etiolated, powerless, irrelevant political class, where presentation has overtaken substance, because there is no substance. And there is no substance because the power has drained away to Brussels.

Boris might now have discovered this. But he is a long way from identifying the remedy. There is only one. We have to leave the EU. All the rest is talk.