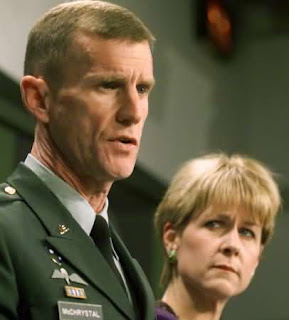 The Washington Post has obtained a copy of Gen Stanley McChrystal's 66-page "assessment report" on Afghanistan. On the back of that, it headlines: "More Forces or 'Mission Failure'" with the strap: "Top US Commander For Afghan War Calls Next 12 Months Decisive". The lead paragraph of a long article written by Bob Woodward then tells us:

The top US and NATO commander in Afghanistan warns in an urgent, confidential assessment of the war that he needs more forces within the next year and bluntly states that without them, the eight-year conflict "will likely result in failure."

To give him his due, though, Woodward then goes on:

McChrystal makes clear that his call for more forces is predicated on the adoption of a strategy in which troops emphasize protecting Afghans rather than killing insurgents or controlling territory. Most starkly, he says: "[I]nadequate resources will likely result in failure. However, without a new strategy, the mission should not be resourced."

This last sentence is the nub of McChrystal's report. As it stands, the coalition forces are doing more harm than good, and are losing the war. Thus, in his report, he says: Success is achievable but it will not be attained simply by trying harder or "doubling down" on the previous strategy.

He then goes on to write that: "Additional forces are necessary, but focussing on force or resource requirements misses the point entirely. The key take away from this assessment is the urgent need for a significant change in our strategy and the way we think and operate."

The British media seems to be slow on the uptake, with the BBC first out of the traps with its report. Now look at the way it handles the issue. It tells us:

The US mission in Afghanistan will "likely result in failure" unless troops are increased within a year, the top general there has said in a report. He recently called for a revised military strategy in Afghanistan, suggesting the current one is failing.

This was followed by The Times which told us: "America and Nato's top military commander in Afghanistan has warned in a secret report that he needs more troops and a new strategy or his mission will probably end in failure."

You can bet that, when the rest of the media catches up, there will be heavy emphasis on "resources" – i.e., more troops - and much less on the need for a new strategy. Very little, I suspect, will be said of McChrystal's caveat, that "without a new strategy, the mission should not be resourced."

For what it is worth, that has been the consistent stance of the British government, which it is why it has resisted the siren calls of the "generals" and the media for more "boots on the ground". The case for more resources is not denied, but they have to be used properly, within the context of a well-founded strategic framework.

To date, the British military have not been able to offer anything like a coherent strategy, even within its own area of operation, as indicated by the tenor of the constant media briefing that we see in the British media. The emphasis throughout has been on more resources. There has been next to no discussion on strategy and, in fact, Stirrup's official "take" is that "the strategy in Afghanistan is the right one."

McChrystal now gives the lie to that, but there is little expectation of the media focusing on that. As with Iraq, the military will be the last to acknowledge that they got it wrong and their pals in the media will back them to the hilt.

The fact is though, that the most recent government (i.e., political) stance of not reinforcing failure has been the correct one. It had always been the intention to wait for the McChrystal review and then make decisions as to force levels on the basis of the strategic appreciation.

Now, it remains to be seen whether the coalition can absorb and deal with McChrystal's recommendations, and indeed whether he has got his priorities right and has offered a successful strategy. We will look at this in a more detailed post.