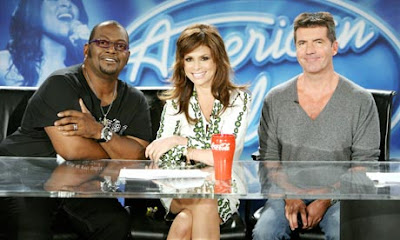 The turd-eaters are in full flow this morning, trilling about "product placement" on the idiots' lantern.

One of many consuming the fare is Jo Adetunji of The Guardian, who follows the "corporate line", under the headline "UK to follow US lead by allowing product placement on television."

Fresh from successes such as these, our little hackette breathlessly tells us that, "while product placement is rife in film, British television programmes have long had to make up fictional products." But, she writes, "That is all likely to change this week after a decision that is expected to allow commercial broadcasters to show sponsored products for the first time."

And why is that "all likely to change"? Well, according to this turd-eater, it is because culture secretary Ben Bradshaw is to announce a three-month consultation on the changes in a Royal Television Society speech this week.

Despite, in March, the then culture secretary, Andy Burnham, saying that lifting the ban raised "very serious concerns" and was "blurring the boundaries between advertising and editorial", Bradshaw avers – according to la Adetnji - that the "climate has changed" and has accepted lifting the ban "in principle".

That "climate", of course, is the EU's Directive 2007/65/EC of the European Parliament and of the Council of 11 December 2007 amending Council Directive 89/552/EC on the coordination of certain provisions laid down by law, regulation or administrative action in Member States concerning the pursuit of television broadcasting activities.

This is now known as the Audiovisual Media Services Directive, updating the 1997 "Television without Frontiers" directive, not that you would expect an airhead like Adetunji to realise this.

Nor indeed do the other turd-eaters, crunching on the same set of press releases, not least Jason Beattie of the Daily Mirror who reports under the headline: "Product placement could mean £100m windfall for TV". This feeble hack cites (as do many) Richard Lindley, chairman of the independent Voice of the Listener and Viewer, who moans that product placement it would "contaminate" TV and inevitably lead to placements on news and current affairs programmes.

No it will not, Mr Lindley, because the rules are made by the EU and specifically prohibit "placements on news and current affairs programmes", which actually makes the comment not worth printing. But nothing is too bad, too irrelevant or too misleading for our idle hacks to print, if it fills a space.

Actually, while product placement is permitted by the new directive, it is not compulsory – in theory. On the face of it, member states are "allowed" to make a choice.

That is the theory, but with broadcasters such as BskyB beaming their trash from Luxembourg, taking advantage of EU law, domestic broadcasters such as ITV would be heavily disadvantaged if the UK decided to go it alone. Thus, the UK government would very quickly find itself in the ECJ, defending an expensive law suit. Thus, it really has not option but to accede to the change in the "climate".

Not to be outdone though, in the Financial Times, it takes two hacks, Tim Bradshaw and Jim Pickard, to chew on the turd, telling us that: "Television advertisements are set to escape the confines of the commercial break as the government reverses its opposition to product placement." There is no mention of the EU, of course.

Nor will you get that from turd-eater Peter Taylor in The Daily Telegraph who, like the rest of the diners, solemnly informs us that: "Troubled ITV stands to reap tens of millions of pounds in new revenue under Government plans to allow US-style product placement on television."

The nearest we get to any recognition of the elephant in the room is from Suzy Jagger and Patrick Foster in The Times, and pair who feel the need to hold hands while they munch. They boldly pronounce that, "There's a time and a placement for everything as TV aims to cash in." You have to go way down in the heap of excrement offered to find the reference to "A European Parliament directive" (whatever that is) that "came into force almost two years ago". It, we are told, "permits product placement in sport and light entertainment programmes, if national governments allowed it. Most other EU nations have decided to lift restrictions."

And that's it. The BBC ran the story on its broadcast news yesterday, with nary a mention of the EU, and all the other little turd-eaters have piled in with the same line. One might suggest they are all up their own northeast passage.