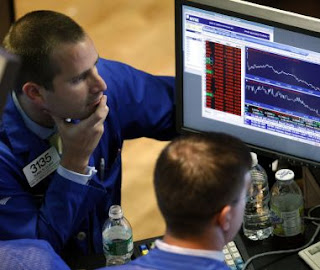 It was very nearly a year ago, with the first phase of the financial crisis in full flow that I observed: "If, by the end of this crisis – if it ever ends – the EU is not a smouldering wreck, it will emerge stronger, more powerful and more arrogant than before. It will destroy the City of London and what remains of our prosperity with it. It will regulate it to death."

The crisis is not over – just in temporary abeyance - with rumours of a currency crisis building ... and hotly denied.

But, if the financial system is weaker, the EU is not a smouldering wreck (yet) and has thus emerged stronger, taking advantage of the beneficial crisis by launching a major new tranche of financial regulation.

This it did yesterday, to no great fanfare, and with media coverage confined to the financial pages, thus lacking any serious political input that would draw attention to yet another – and very major – EU power grab. On the table is what even the EU commission calls an "important package" of draft legislation, which it tells us "significantly strengthen the supervision of the financial sector in Europe."

The legislation will create a raft new EU institutions, comprising a European Systemic Risk Board (ESRB), which will "detect risks to the financial system as a whole with a critical function to issue early risk warnings to be rapidly acted on", a European System of Financial Supervisors (ESFS), composed of national supervisors, and three new European Supervisory Authorities for the banking, securities and insurance and occupational pensions sectors.

At this stage no one can even begin to assess the long-term effect of these institutions on our financial sector, but what is very clear is that they do involve a substantial transfer of power from national authorities to the EU – the results of which, as history tells us, are bound to be malign.

The system is based on the Larosière report, about which we wrote earlier this year, but so technical and arcane are the provisions that few people will understand their significance and they will thus pass into our legislative system with little comment and no political controversy. And when they do, the UK government will have lost that much more power and will be weaker as a result.

The "colleagues", of course, are gift-wrapping this and giving us a good spiel, with Barroso telling us the aim of the benevolent commission is "to protect European taxpayers from a repeat of the dark days of autumn 2008, when governments had to pour billions of euros into the banks."

Furthermore, says Barroso, this European system "can also inspire a global one and we will argue for that in Pittsburgh". Global governance is about to take another lurch into our lives.

Nothing can disguise the nature of this power-grab, but then the "colleagues" do not need to. The deed has already been agreed in principle by the European Council in June when we reported that, in the couloirs of Brussels and beyond, one of our most important wealth generating activities had been "stitched-up, kippered and delivered to the enemy."

We then forecast that as the EU exerted its malign grip, its depredations would not be reported and that which escaped into the public domain would not be understood. The only thing certain, we said, is that we will pay, directly and indirectly, and keep on paying ... until such time as we are forced to leave the EU or go bankrupt.

Nothing has changed. We are just that bit closer to the final outcome – whatever it might be.