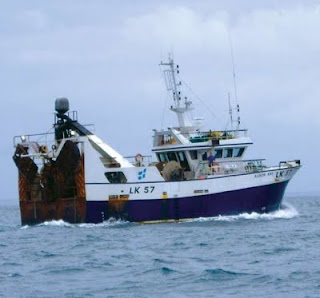 ... when we were interested in headlines such as Fishermen despair at 'crippling' EU rules. There was even a time when the fishermens' plight would make the front pages of the national dailies, with tense debates in the House of Commons.

And plight it is. John Buchan, a "top north-east skipper" is warning that the white fish fleet is facing its biggest crisis for 30 years and has called for urgent action to stop boats being forced out of business.

But his plea only gets as far as the Aberdeen Press and Journal. It will get no further. It is not that people don't care. Many do – passionately. But the issue is bound up in a sense of futility, hopelessness and despair.

So, we stop writing about it. People stop discussing it. There is no point in either. You might just as well complain about the colour of the moon. And therein lies the victory of the EU – it has worn us down with its own inertia and we have given up.

Except we haven't. Our resolve has never wavered. When or if the Irish roll over on Friday and bow to the pressure of the "colleagues", our resolve will not waver. But we have no illusions. Getting the UK out of the EU is going to take some time. And, by the time we succeed, there will be no fishing industry left, worth talking about.

Call it a casualty of war. And there will be more before we prevail.