A grasp of economics 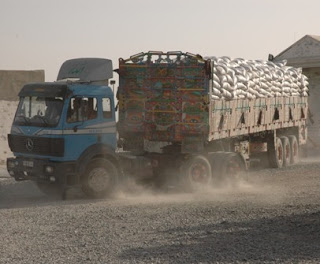 For all the false optimism about the reduction in opium production in Afghanistan this year (see video below), there is one writer who has got the point. This is Simon Jenkins, who writes in The Guardian:

"The Afghan poppy crop is largely a function of the price of poppies compared with that of wheat ... The crop has shrunk because the wheat price has risen and the recession has dampened European demand. It will rise again."

This is exactly as we wrote a few days ago, and Jenkins is absolutely right. Market forces have a far more powerful effect than anything our pitiful efforts might achieve.

Furthermore, the situation is even worse than that. The UN faithfully trots out statistics on the number of provinces in Afghanistan that are "opium free" – i.e., no longer grow poppies – as if this actually meant something.

Particularly fêted is the apparent success in the northern provinces, which used to be the heart of drug-producing territory but which are now largely poppy-free. But to claim this as a "success" is completely (and perhaps wilfully) to miss the point.


With growers of Helmand and Kandahar provinces (with production in the latter having increased) moving into the market, northern growers, who can produce only about 10 kg of opium per hectare, simply cannot compete with average yields of 56 kg/ha which can be obtained from the more fertile soils in the south.

Thus, the northern growers have done exactly that which happens in every other sector faced with a similar challenge. They have moved into "added value". Instead of growing poppies, their main economic enterprise is converting the raw opium into the much more valuable heroin, and acting as a conduit for the thriving export business (as well as serving the growing domestic market).

During the rule of the Taleban, much of the "added value" processing was done outside Afghanistan, in Tajikistan and elsewhere. Now the value remains in the country, while Tajik and other businessmen have compensated for the loss by expanding their arms-trading and other nefarious enterprises.

And into this mix do we blunder. Clearly, since one of the major control mechanisms on opium growing is the price of wheat, our interests are best served by keeping the wheat price high. This can be done be a variety of market intervention mechanisms, principally either by intervention buying (as in the EU) or by implementing a minimum-price guarantee, topping-up farmers' incomes if the wheat price falls.

These options, however, have apparently been blocked by the US – it seems on "ideological" grounds, although it is difficult to pin down exactly where and why there is this blockage. If this is the case, then we are looking at mass hypocrisy, with US grain growers benefitting from some of the highest subsidies in the world.

Without a support scheme, things are bad enough – but we seem intent on making it worse. With Brown's much-favoured "wheat not heroin" scheme, we are giving away free seed wheat and fertiliser to Afghan farmers, while much of the aid is directed towards improving irrigation.

The net effect of these initiatives is substantially to improve wheat production. In the absence of a developed marketing infrastructure, this leads to local surpluses and crashes the price of wheat, thereby altering the economic balance in favour of growing opium, issues we have explored in depth here and here.

Our policies, therefore, are actually achieving the precise opposite of what we intended. We are thus paying huge amounts of money and putting soldiers' lives at risk, escorting seed convoys and distributing seed and fertiliser, to make the situation worse.

Of course, no discussion about opium-growing in Afghanistan is complete without bringing up the issue of forcible eradication. Forget the economics, some continue to say – just burn, grub up or poison the illegal poppy fields.

However, bearing in mind that coalition forces control perhaps less than ten percent of the area in the southern provinces of Helmand and Kandahar, ground intervention might be difficult.

Aerial spraying is an option but then, there is no better way of driving hundreds of thousands of Afghanis into starvation, forcing them into the arms of the Taleban. The current level of insurgency would be nothing compared to what it would be.

In the long run, though, the economic solution would work. It has worked on a small-scale in Afghanistan and has been successful elsewhere in the world. But nowhere, ever, will any policy succeed when it flies in the face of the very fundamentals of economics, which is what we are trying to do in Helmand. We might just as well try to re-write the laws of gravity.