There is no alternative 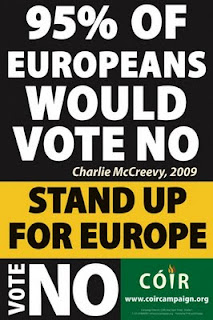 "We are confronted by a venture that is using anti-democratic means to establish an anti-democratic power structure, to no useful end for the people of these isles. Since this unwelcome revolution is being forced upon us, perhaps it is time to end the long taboo and ask whether we must inevitably go along with it."

That is from Ambrose Evans-Pritchard, as part of the ongoing "debate" on the European Union in The Daily Telegraph.

His piece is juxtaposed with an article by Nicholas Fraser. He went to a midsummer crayfish party near Stockholm packed with the affluent, the good-looking and the politically correct. And he couldn't find anyone who didn't view British Euro-scepticism with reprobation. Then we get Stephen Wall who writes that "there is no viable alternative" to the EU – Britain has to make the best of it.

So there you are. If you want to find favour with the Scandinavian glitterati and you accept the view of Stephen Wall, then we should roll over and let this venture use anti-democratic means to establish an anti-democratic power structure, to no useful end for the people of these isles.

Actually, we don't get a choice – although Lord Tebbit has warned David Cameron that he must hold a referendum on the "European constitution" or risk losing voters to UKIP.

Tebbit charges that Cameron has backtracked on a pledge to hold a vote if, "as expected" the Irish vote "yes" because the constitution would already be in force by the time he came to into office.

I'm not so sure that the Irish are that ready to roll over, but it's difficult to read. The Tap blog detects signs that the rats are making preparations to desert the sinking ship, while the Telegraph is sending none too subtle signals to its Irish voters as to which way it thinks they should jump.

Those who are thinking of jumping UKIP's way will find that the desertion of the King Rat from the leadership – but not very much else – has opened up the prospect of a contest for his replacement between the Lord Pearson of Rannoch and a six-foot-four lesbian. Not much of a contest, some might say, except that Pearson is Farage's choice, which may give some UKIP members pause for thought.

Whoever wins, it is unlikely to make much difference to the vote at the general election. Tebbit might have fond illusions about UKIP sucking votes from the Europhile Cameron, but such is the head of steam building up against Brown that the bulk of voters will probably vote Tory for no other reason than to ditch an unpopular prime minister. On recent form, UKIP is unlikely to do well.

During the general election campaign, Mr Cameron and his euro-luvvies will do their best to keep "Europe" off the agenda – as always – which will leave UKIP gasping for the oxygen of publicity. Only perhaps the Irish can inject a bit of fire into the issue, and then only if they vote "no" in just over two weeks time. And which way they will jump is anyone's guess. There is no alternative but to wait and see.