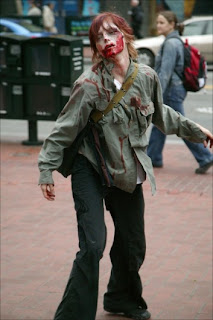 After their long summer break, the apparatchiks of the Socialist Republic of the European Union are slowly coming back to life – inasmuch as these zombie-like creatures can ever truly be regarded as "alive".

And right up front is agriculture commissioner Mariann Fischer Boel, indulging in a bit of crude populism, declaring that the zombie-in-chief José Manuel Barroso is to consider allowing member states to ban EU-approved GM crops.

The European Commission President wants to "look at whether we can give the member states more freedom on this issue," says Fischer Boel, adding that she would support this idea.

At the same time, apparently contradicting the supposed effect of this new "freedom", she also advocates speeding up market approval for new GM maize lines "to lift trade barriers that have a emerged as a result of asynchronous approval of GMOs in the EU and in GMO export countries."

But then come the weasel-words. A distinction must be made between the importation of genetically modified plants and those grown in the EU itself, she says.

Then she adds: "I know that cultivation is a very sensitive issue." Member states do not have the right to prohibit the cultivation of GMO crops on their territory once it has been authorised in the EU, except if evidence is provided that the GMO is harmful for human health or the environment – which, so far, no member state has been able to provide.

Nevertheless, because there is little or no public acceptance for GMO acreage among the public, a majority of EU member states are lobbying to change this practice and Fisher Boel is making soothing noises about letting them have their way.

But all is not what is seems – it never is with that lot. Having been unable to break the logjam and get the member states to accept EU law on GMOs, and with the WTO breathing down its neck, the zombies are trying to pull a fast one.

Basically, the deal is that, at long as the member states accept the import of GM crops from Monsanto-land in Brazil and the USofA – thus keeping the WTO off their backs - the munificent EU will allow them to ban their own farmers from growing them.

I can see this going down a storm with our own NFU, and then the greenies won't be too happy either. But with the poison dwarf also playing games, the Poles telling the commission to get stuffed (in Polish, of course, when even "please" sounds like a swear-word), the zombies are really over a barrel.

So the drama continues, dragging on into eternity, we wrote last year. Nobody in the media here really gives a damn, the Tories don't want to touch it because it sets the greenies and their EU-luvvies on a collision-course, the government is running so fast from it that you can smell the burnt rubber at the top of Whitehall, and nobody listens to the farmers anyway. They're always moaning, so they can safely be ignored.

For all that, this really is a delicious conundrum – greenies versus zombies. It doesn't matter who wins, as long as they tear each other apart in the process.