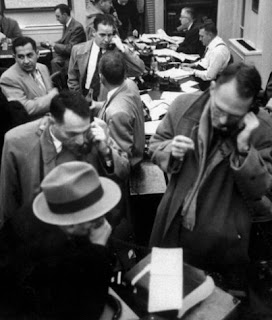 The New York Times was amongst the first, with "General Calls for More US Troops to Avoid Afghan Failure".

Right behind in the coprophagic stakes, however, was Sky News with "US General: 'More Troops Or Lose Afghan War'", alongside Channel 4 News with "McChrystal wants more Afghanistan troops" and the news agency AFP which has "Afghan war 'to fail' without more troops: US general".

The Press Association joins in the feast with "US call for more Taliban war troops" and The Daily Telegraph, borrowing from Reuters gives us: "Nato mission in Afghanistan 'risks failure' without more troops, says Stanley McChrystal".

These are but a small sample of the growing torrent of similar headlines, all copied out mindlessly, as hacks consume each others' fare. And The Guardian, quick off the mark with its first story, has now planted a Union Jack on it, proclaiming: "British commanders demand more troops for Afghanistan".

Strangely though, Associated Press comes in with "Afghan police say more troops not the answer," but then McChrystal would doubtless agree – certainly in the sense that AP puts the proposition.

Then, making the most of the feast is Jerome Starkey in The Times, blithely giving us: "Analysis: the flaws in General McChrystal's strategy". More troops might stop Nato failing in Afghanistan, he writes, but they certainly won't guarantee victory. There is no way he could have read McChrystal's report because, if he had, he would have found that that is precisely what the General is saying.

Nonetheless, way back in the dim and distant past (in journalistic terms) – i.e., yesterday - Reuters was headlining: "Obama: Need Afghan strategy before more troops", reporting that "President Barack Obama said in interviews aired on Sunday he wants to wait to determine the proper strategy for US forces in Afghanistan before considering whether more troops should be sent there."

Now, Obama may be the coprophiles' golden boy but, like the rest of us, unless you stick to the narrative, you don't get heard. The media narrative is that we need more troops, and that is what you must say to get a headline. Media coprophagia has its own rules, it seems. It must be the sole fare – you are not allowed to produce anything else.