A triumph for propaganda 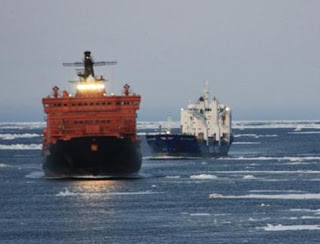 Front page of The Independent today proclaims: "A triumph for man, a disaster for mankind", heralding the completion of what it claims to be "the first commercial navigation of the fabled North-east Passage."

"It is an epic moment," says the paper, "but also a vivid sign of climate change in the Arctic." The picture caption reinforces the point, telling us: "No commercial vessel has ever successfully travelled the North-east Passage, a fabled Arctic Sea route that links the Atlantic Ocean and the Pacific far more directly than the usual southerly cargo route."

And none of this is true. It could not be further from the truth – it is a complete and utter distortion, a fabrication, a lie. An Englishman's Castle sussed it, by the simple expedient of looking up Wikipedia

But there is much, much more to it than that. Writes Independent hack Tony Paterson, in Berlin, "It has been one of the elusive goals of seafaring nations almost since the beginnings of waterborne trade, but for nearly 500 years the idea has been dismissed as an impossible dream. Now, as a result of global warming, the dream is about to come true."

For the truth (Wikipedia apart), let us see what the Russians say about this "impossible dream". More correctly known as the Northern Sea Route (NSR), they tell us that the NSR is Russia's main national transport line in the Arctic.

It has been commercially exploited since 1935 when four cargo motor ships passed through the route during a single navigation season. In 1936, warships of the Baltic Fleet successfully arrived in the Far East. Russia, we are told, has invested enormous material and human resources in exploring and equipping this route. Powerful icebreakers and icebreaking cargo ships have been constructed, navigational and hydrometeorological systems established. And furthermore, up until the end of the 80s, the Arctic transportation system was self-supporting. The volume of sea traffic reached 7 million tons in 1987.

The record tells us that, after the collapse of the Soviet Union - for reasons entirely related to ice conditions and entirely to do with the breakdown of the route infrastructure - shipping along the route diminished but, we learn, between 1993 - 1997 the volume of sea cargo along the NSR was still 150 - 200 thousand tons a year. A new post-Soviet peak was established in 1993 when 15 Russian ships with 210 thousand tons of transit goods passed along the route. Now, there are even tourist trips.

So, how did the newspaper and its fellow travellers, such as the BBC, get it so wrong?

For the genesis of error, we need to look to the hype at the start of this "epic moment", which involved two German-owned vessels, Beluga Fraternity and Beluga Foresight (pictured). Amongst the first conveying the misinformation was this, at the end of July, telling us that the the transit of these ships would be "the first time a vessel has crossed from Asia to Europe through the Arctic on a commercial passage."

In August, though, Reuters was more circumspect, although it did lay the beginnings of the false trail, announcing: "Climate change opens Arctic route for German ships."

"The melting of Arctic ice as a result of climate change has made it possible to send Beluga's multi-purpose heavy lift ships along the legendary Northeast Passage," we were informed, the agency citing as its source the chief executive of the Beluga Group, Niels Stolberg.

Now, Stolberg is something of a devotee of the climate change religion, not least because he is at the forefront of fuel-saving developments, pioneered in the name of saving the planet. One of those is the "Sky Sail" – an enormous "kite-like sail" that was recently fitted to one of Stolberg's ships, funded, one discovers by the EU as part of its "Life" programme on climate change, to the tune of €1.2 million.

Enthusiast for the new religion he might be, even Stolberg back in August did not make the bold claims that are being made now. He told Reuters that this was the first "non-Russian commercial vessel" cleared by the Russians through the route. That much was possibly true, but – as we know – there had over the years been substantial Russian commercial traffic. Thus did Reuters talk about German ships. In other words, this was a "first", but only for German, as opposed to Russian ships.

By today, however, this has morphed into the Independent legend, that, "No commercial vessel has ever successfully travelled the North-east Passage ... Explorers throughout history have tried, and failed; some have died in the attempt," it warbles.

In support of this fantasy, both the Independent and the BBC cite the 1553 expedition by Sir Hugh Willoughby, who died attempting to find the route. But neither of them tells us that the route was successfully navigated in 1879 by Adolf Erik Nordenskiöld who took his ship, the SS Vega, all the way through the passage from Europe to the Bering Strait.

As to the current ice conditions which allowed the Beluga ships transit, the National Snow and Ice Data Center gives the overview: It tells us:

And conditions, it seems, were marginal. The two Beluga vessels had to be accompanied by at least one Russian nuclear ice-breaker during the whole of the trip. The two ships "encountered snow, fog, ice floes, and treacherous icebergs which showed only about one meter of their huge underwater volume on the sea's surface." Passing the northernmost point, the Vilkizi Strait on the tip of Siberia, half of the sea's surface was covered with pack ice and the captains of both vessels had to call Russian ice pilots on board to shepherd them through.

Nevertheless, the story is just what the warmists wanted. Says Melanie Duchin, Arctic Expedition leader on board the Greenpeace ship Arctic Sunrise, "This is further proof that climate change is happening now." Predictably, she then adds that the development put greater pressure on world leaders to agree a major emissions cut at their Copenhagen meeting in December. "This is not a cause for celebration but cause for immediate action," she declared.

Interestingly, the BBC is now downplaying the hype, referring only to "German ships", and admitting that the route has been "passable without ice breakers in 2005", neglecting to tell us that this journey required substantial assistance from ice breakers. So much for global warming.

Not from The Independent though are we allowed to know the truth. Its editorial proclaims that, "One hundred years ago, the news of a ship successfully traversing the treacherous North-east Passage would have prompted popular celebrations and wild enthusiasm." Yet, despite the feat of the Vega in 1879, this is now "a confirmation of just how rapidly and dangerously our climate is changing."

There are lies, damn lies, and then there is The Independent.