Dealing with the stink 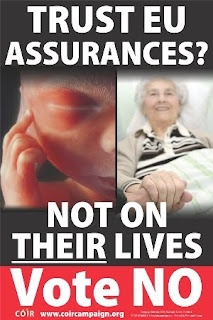 Emerging through a number of blogs and other sites are reports of a Gael Poll on voting intentions for the Irish referendum. The poll, we are told (rather dubiously), suggests there has been a massive surge in support for the "no" campaign, with 59 percent against the treaty and only 41 percent prepared to vote "yes".

This is claimed to be one of the largest polls of its kind ever carried out and the pollster Gael Poll has a good record on the last referendum, predicting a 54-46 percent margin for the "no" campaign, against the actual result of 53.4 percent "no" and 46.6 percent "yes".

What is puzzling though is that, despite the profound implications of this poll, none of the media in Ireland or the UK seem to have reported it. That in itself is not unusual – these days, the media are more characterised by what they do not report, than what they do. But even our dire MSM might, one have thought, be vaguely interested in this piece of news. However, given the dubious nature, it is perhaps just as well.

Nevertheless, scanning the Irish media today, it is very hard to find any serious reporting of the referendum, and it has been the case that the issue has been played low-key by a media that is wholly in favour of the EU treaty. That might tell us something, a sign that the "yes" side lacks confidence and is expecting a thrashing.

A "no" victory would, of course, set the EU issue on fire in the UK, with the referendum coming just a few days before the start of the Tory conference. As always, there is no specific "Europe" debate on the conference agenda, but some statement on the result will be expected, possibly in the leader's speech on the final day. Then, no doubt, Cameron will be under pressure to make his intentions clear as to the UK referendum.

Although the offer on the table is for a referendum on the treaty, if it has not yet been ratified by the time a Tory administration takes over, there is no logic to this stance. If the Irish do vote "no", the treaty is effectively dead. There seems no particular advantage in having a referendum on something which is not going to happen.

In response to a "no" victory, the "colleagues" would, in any event, have to come up with a position – presumably at the autumn European Council, held under the Swedish presidency. Then it is possible that a formal obituary will be written, plus a term of mourning declared. It is hard to see how the "colleagues" could get away with another "period of reflection", although their capacity for navel gazing is endless.

The broader problem though is that ditching the constitutional Lisbon treaty solves nothing. We will still be in the EU and, as much of the new treaty has already been implemented, it will very much be business as usual. The only obvious effect is that the "colleagues" will not be able to preen themselves with a full-time council president and their new "foreign minister".

From the Tory perspective, however, the "death of Lisbon" might afford the opportunity to "park" the EU as an issue, which will be the default mode of a Cameron administration. This will leave us once again in that twilight world, where the EU remains a festering sore in the background, unloved and unresolved.

Against all that though, the "colleagues" will not take a defeat lying down. If Lisbon does fall, it will only be a matter of time before a replacement treaty is on the cards, and Cameron will have to look to fending off calls for a new IGC. That, though, is so far into the future that it is not even on the political horizon and, before even that, there is the little matter of a general election.

There, despite the very obvious lead in the polls, the outcome is not absolutely certain – and it is by no means guaranteed that Cameron can attract enough votes to give him a comfortable majority in the House.

The unknown factor is the behaviour of the electorate towards the minority parties – whether there is enough disaffection with the mainstream parties for the "UKIP effect" to kick in or whether, as in 1997, there is the classic "two party squeeze", with the tiddlers being left out in the cold.

Certainly, one detects in the general public mood a lack of enthusiasm for the Tories, and many people will be watching closely for Cameron's reaction to the Irish referendum, irrespective of the result. The EU may not be a battleground on which the Tories prefer to fight, but a very significant number of votes are going to be decided by what he says (or does not say).

As always, therefore, the "elephant in the room" will continue to cast its baleful effect and, sooner or later, the politicians are going to have to deal with the stink.