A nation of yes-men? 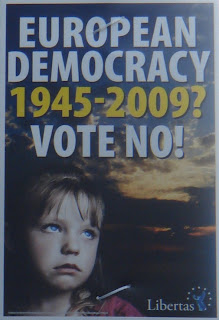 That is the question put by The Independent, reflecting on the possible outcome of the Irish referendum, now less than a week away.

Certainly, if the latest poll is to be believed, the Irish are about to become yes-men. According to a Red C/Sunday Business Post poll, 55 percent of voters back the constitutional Lisbon treaty, compared with 27 percent against, and 18 percent undecided.

Excluding the "undecided" that equates to a 67 percent score for the "yes" side, with the "no" campaign trailing on 33 percent. There is still a huge – some say unbridgeable – gap to close.

Earlier last week, the Irish Times, under the headline "Relief for Yes side but opponents can take heart too", was parading the results of an Irish Times/TNS mrbi poll.

With three polls in the bag, therefore – although not necessarily comparable – we see the "yes" side scoring 61, 59 and now 67 percent, against 39, 41 and 33 percent for the "no" campaign. This does not seem to make sense, as the report on the Red C/Sunday Business Post poll talks of the "yes" side having dropped seven points since "the last poll two weeks ago" as against the "no" side having increased by four points.

Whatever the precise situation, though, it looks as if the "yes" vote is holding firm, offering a gloomy prognosis for next Friday. The situation is even more gloomy when one appreciates that, at a similar stage coming to the end of the first referendum campaign, the "no" side had gone into the lead by 35 percent to 30 percent, with 35 percent still undecided.

Enter then Christopher Booker into the lists, with his column headed "Ireland's EU referendum is the last stand against the 'project'". On the basis of the polling, it looks more like Custer's last stand, the dwindling band of naysayers surrounded by the Sioux, on the verge of defeat.

If we do see an EU-inspired version of Little Bighorn, however, it will come as no surprise. Short of Karzai-style stuffing of the ballot boxes, Booker observes, the European and Irish political establishments could scarcely have done more to push this referendum in the way they want. He writes:

To ensure a "yes" vote, all the normal rules governing balanced media coverage were suspended. The European Commission has poured €1.5 million into an unprecedented advertising blitz. EU commissioners, led by President Jose-Manuel Barroso, MEPs and officials have been flooding in to promote the cause. However, when one or two British outsiders – including Nigel Farage, leader of a group in the European Parliament, and Lorraine Mullally, director of the think-tank Open Europe, and of good Irish stock – came over to campaign for a "No" vote, their "foreign intervention" was greeted by orchestrated howls of abuse.

From thereon, Booker deals with the reasons why the political class of "Europe" has been so desperate to get its way over this treaty. His story, straight out of The Great Deception tells of a "hugely cumbersome, inefficient, corrupt and remote form of government, riddled with dishonesty and wholly undemocratic," which the people of Europe could never again call to account.

When the voters of Ireland go to their polling booths this week, they will be the last in Europe with a chance to say "no" to the political class which now rules over us – thanks to what has amounted to the most extraordinary slow-motion coup d'état in history. And, sadly, it looks as if the yes-men might have it.

But, if this is to be Custer's last stand, the eventual outcome for Sitting Bull wasn't that happy either. Barroso beware!