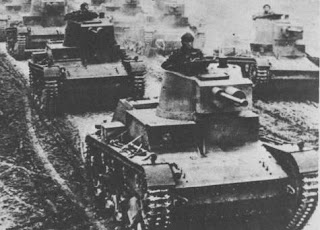 Reminding us of the days when men were men and newspapers actually had news in them, The Daily Telegraph has republished its edition for 4 September 1939, announcing the outbreak of war.

One could not help but smile, though, on reading the views of the paper's then resident military expert, Major-Gen A C Temperley, styled as the "military correspondent", who is asked to assess the calibre of the new German army.

Right up front, his view is expressed in the headline, which reads, "Germany lacks experienced officers" with the strap reinforcing the point, telling us: "limited number of trained reserves available". This Temperley works out from his assessment of the peace-time strength in 1938, when the Wehrmacht was said to have had 51 divisions.

On this basis, expanding to 120 divisions war-time strength would mean that many of the new divisions would lack a cadre of fully-trained officers. Temperley contrasts this unfavourably with the French army, which has a "solid block" of 5,000,000 soldiers "that have done their full service in the ranks". The lack of experienced officers will be one of Germany's great handicaps in the war, he concludes.

Helping him on his way to this conclusion is his earlier attendance at German manoeuvres in 1936 and 1937, when the only officers of seniority (that he saw) were the battalion and battery commanders. Apart from that, the officers were mostly "2nd lieutenants" and not more than one of them per company or battery.

What Temperley could not have known – and clearly did not know – was that every German NCO and officer was fully trained in the duties of the rank immediately above his own, an army built for rapid expansion, which meant that the officer corps was far stronger than he had anticipated.

Further, even as he was writing, he had grossly under-estimated the size of the Wehrmacht, putting the number of Panzer divisions at five, when there were already nine, with a number of independent brigades and attached regiments which were to form the nucleus of even more. And against Poland alone, Hitler had 60 divisions ranged, including seven Panzer divisions.

In retrospect, however, nothing more jars than Temperley's comments about the Polish army. The Poles are "no mean adversaries", he writes. They have a population of 30 million and 30 peace-time divisions. Their morale is excellent and they will fight to the very end.

Then does the great man tell us: "All recent fighting with the machine gun arm, increased as that has been, goes to show that the greater power lies with the defence and the Poles should be able to take full advantage of it. Their Army should render a good account of itself." A mere 24 days later, Warsaw had capitulated and it was all over by 6 October when the last Polish troops surrendered.

Temperley had, of course, failed completely to follow the writings of Fuller and Liddel-Hart (or ignored them - Liddel-Hart had written several times to Temperley), neglecting the power of the formed tank division. Neither does he mention the Luftwaffe which in doctrinal terms was a branch of the Wehrmacht, acting as its assault artillery.

With some insight, however, Temperley writes that "all wars now are wars of petrol and oil, which is for Germany a great difficulty. She has not got the petrol for a long war unless she succeeds in obtaining access to the Rumanian petrol supply or Soviet Russia is prepared to supply her extensive needs."

As it turned out, Stalin was more than willing to supply Germany, right up to the point when Hitler turned on him, but then his armies did succeed in "obtaining access" to the Rumanian oil fields. That, in the event, was to be Hitler's undoing, sending his forces south instead of putting all his energies into taking Moscow. But, with the capture of the Ploesti oil fields, we were in for a long war.

What is so striking about Temperley is that he gets virtually everything wrong. Yet, this man, of exalted rank who, after all had "been there" – in Germany, and seen the Wehrmacht on manoeuvres – doubtless was regarded with great respect as the authority of his day.

It is perhaps worth remembering that, not only were the Germans comprehensively underestimated, so too were the Japanese, a fatal error which enabled a force of 30,000 to defeat the British in Singapore with a force more than three times larger.

With the gift of hindsight, it is so very easy to see quite how wrong Temperley was. But, even at the time, there were people saying he was wrong. They were ignored. The Temperleys of that world were the "experts" and they had the ear of the high and the mighty. There are similar experts in a wide range of fields today, who are listened to with just as much respect. And many are just as wrong.