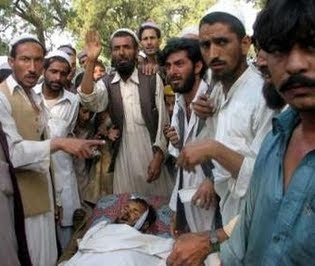 Gradually, the British media is absorbing the implications of the McChrystal assessment, and the political ramifications surrounding it, and we are beginning to see some in-depth reports.

The Times for instance, is running a six-part series on Afghanistan, the latest dealing with the battle for "hearts and minds" on the home front, picking up on a theme it rehearsed in July.

The biggest challenge for the government, says this paper, is not how to beat the Taleban but how to keep the public at home onside. People tend to support the Armed Forces whatever they do but if there is any perception that British troops are dying in Afghanistan for no good reason the tide of opinion will turn.

Keeping people "onside" requires, at its most basis, a government which is able to offer a clear strategic direction and an indication that progress is being made, at an acceptable cost, with some prospect of an end in sight.

Defence secretary Bob Ainsworth, agrees that the government has to make clear the real reason why we need to be in Afghanistan. First and foremost, he then says, we must get security right so that we can prevent Afghanistan from once again becoming a haven for terrorism.

Only then does he moves on to tell us that building the Afghan state - its education and health services, alternative livelihoods to drugs and a strong legal system - will give the people a better future than the one offered by the Taleban.

The problem with that is that Ainsworth does not make a clear causal link between his assertions. A "secure" Afghanistan, he asserts, is necessary to prevent Afghanistan from becoming a haven for terrorists. He then asserts that building the Afghan state will give people a "better future" than the one offered by the Taleban, but he does not tell us that this condition is necessary to defeat the Taleban. We are left to assume that, as indeed we have to assume that achieving this desirable condition is conditional on achieving security.

The sequential relationship between establishing security and then building the Afghan state, however, seems to have lodged as the prevailing paradigm, with the greater problem that we appear to be stuck in stage one, as yet unable to establish the security on which everything else depends.

However, it is now readily acknowledged that defeating the insurgent – in this case the Taleban – and thus achieving security, depends entirely on gaining the support of the people. Yet, to gain the support of the people, it is necessary to give people a "better future" which, under the prevailing paradigm, demands that security is first achieved.

Expressed thus, this is something of a self-defeating task, unless overwhelming force can be brought to bear over a very short period of time, thus to secure an area and allow rapid improvements to be implemented, all with the aim of convincing Afghans that there is a prospect of a "better future".

This, presumably – and, in fact, almost certainly – is what McChrystal aims to achieve through his assessment. And, while he has not yet formally asked for more troops, we learn from The Washington Post that he is about to do so. That request, though, will be made to the Department of Defense, which has indicated that it will not immediately forward it to the White House, pending the current strategic review which is being conducted by the president.

Here, one can understand the dilemma in the White House. There is absolutely no guarantee that the McChrystal plan – such that it is – will actually work, or indeed any indication that it has any chance of working. Based on the Iraqi "surge" concept, there is in fact every chance that it will not.

Thus, one can see the attractions of trimming back the ambitions, turning away from a counterinsurgency strategy, where the focus is on the people, to a counterterrorism strategy where the focus is on killing the enemy – in this case al Qaeda. Unfortunately, as Captain's Journal makes abundantly clear, that strategy is unlikely to work either.

Torn between two equally unattractive prospects, therefore, the response of the White House has been delay. Since late August when McChrystal delivered his report to the president, there has been no progress. No decisions have been made and there is no indication that one is forthcoming. A dangerous strategic vacuum is building up, where troops on the ground are marking time, waiting for a decision – and action – that they believe will enable them to make progress.

That delay is the worst of all possible worlds, and it is being noticed. Richard Norton-Taylor of The Guardian writes that Gordon Brown and, "less characteristically" (his words, not mine), Barack Obama appear irresponsibly indecisive. US and UK military chiefs are tearing their hair out at the inability of their political masters and civil agencies to get a grip on the Afghan conflict.

If the home front needs signs of direction, firm leadership and progress, this indecision simply reinforces the sense of drift. As casualties mount – as they doubtless will – the frustration and uncertainty may yet spill over into outright hostility to the war, culminating in demands for complete withdrawal.

We are, in effect, on the road to nowhere and while, generally – in road safety terms – we are told that "speed kills", on this particular road the greater danger might be delay. But if the wrong decision is also likely to have fatal consequences, there is a problem building up of alarming proportions. An immediate decision might rebuild public confidence in the short-term but the longer-term cost might be strategic failure, with catastrophic effects on public sentiment.

Perhaps the real problem is, in fact, the focus on strategy without due consideration for tactics. We will have a look at this in the next post.