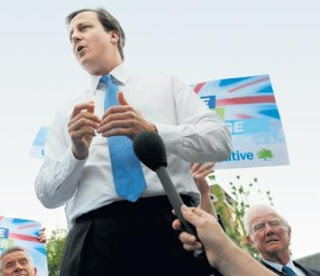 According to an ICM poll carried out for The Sunday Telegraph, 40 percent of respondents want Britain to leave the EU. This, we are told, is a higher percentage than in other recent polls.

Both these figures are somewhat higher than the 57 percent recorded by a YouGov poll earlier in the week, but one wonders how comparable they might be. Whether they are or not, this is not good news for Cameron, although it remains to be seen whether such sentiment will be sustained and have any electoral impact.

It is certainly the case that, should Cameron commit unequivocally to a poll, come what may, most of the UKIP vote would walk his way. That means, potentially, a million-plus votes are there for the taking.

On the basis that politicians, as a rule, value every vote, the fact that Cameron seems so disinterested in harvesting an easy crop of votes fuels much of the suspicion about Tory intentions. Furthermore, Cameron is sending a signal to a swathe of the electorate, effectively stating that he does not care about their votes.

That is a very dangerous signal to send, for an election which should be in the bag but which is not a foregone conclusion. This latest poll is perhaps the electorate sending a signal back to Cameron. He would be foolish if he dismissed it outright.