The values of the harlot 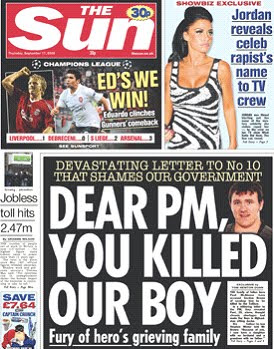 One of the difficulties of blogging is having to make a choice between frequency and length. On balance, longer pieces take more time – and are read by fewer people – so the optimum is many short pieces published frequently.

However, on this occasion – as with many others – it is impossible to do the subject justice without dealing with it at some length. And I refer here to the media treatment of a letter from aggrieved relatives directly blaming the prime minister for the death of Sergeant Paul McAleese, killed by an IED on 20 August in Sangin, coming to the rescue of his stricken colleague, Private Johnathon Young.

Leading the fray was The Sun but, displaying exactly the characteristics we have noted before, the rest of the media piled in, repeating the story.

This, over on Defence of the Realm, we argue, is the media adopting the values of the harlot – power without responsibility. It is a depressing illustration of how low our media have sunk.