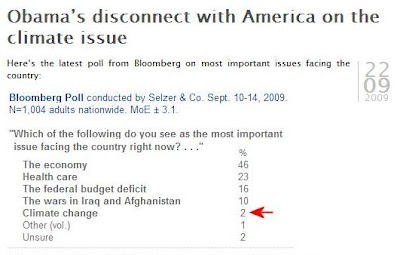 The more you think about it, the more striking the phrase used by Martin Newland becomes. His "moral infantilism" so aptly labels much of what is currently wrong with society – or, more specifically, our leaders.

The chart above, reproduced from Watts up with that is perhaps a good illustration of the phenomenon. There we have the expression of the public view of what is really important yet, by contrast, we have Obama strutting the world stage, telling us that "climate change" is the problème du jour - and nothing is more important.

Arguably, the inability correctly to assess priorities – to distinguish between what is truly important and what is irrelevant fluff – is one of the key signs of "moral infantilism". It accounts for the disconnect between our leaders and the rest of us, and between the media and us. They have lost that vital ability to focus on the important.

In that context, it is interesting to see that the public ranks the wars in Afghanistan and Iraq, effectively, as five times more important than climate change. Yet, while there is an urgent need for Obama to make a decision on Afghan strategy, he fritters away his time grandstanding at the UN, while the BBC liveblogs the show and completely misses the point on Afghanistan.

In fact, the British media, in general, is displaying advanced signs of "moral infantilism". Today, the main focus is almost entirely on Baroness Scotland, but addressed in terms of personality politics.

The woman has been caught out breaking the law on employing an illegal immigrant, but what is perhaps far more important is summed up in a letter to a newspaper. This tells us that Home Office has admitted that: "Currently, employers do not have a reliable means of establishing whether a job applicant has the right to work here."

There lies a major – if not scandalous – defect in the system. We have a law, with all its penalties, with no reliable means by which an employer can actually avoid breaking it.

The focus on Baroness Scotland is all very well, but the intent is to secure another "scalp" – the resignation of another minister. But her resignation will solve nothing yet, should that be achieved, the media and political caravan will pack its tents and move on, hunting for the next scalp. There is no real interest in the substantive issue.

Thus, no one will argue that the "technical breach" of the law, as Baroness Scotland would prefer to call it, is not important. But the media chooses to focus on securing a ministerial resignation which then turns an important issue into a sterile witch-hunt and trivialises the entire affair. And therein lies the "moral infantilism". The disease is rampant.