They should have kept quiet 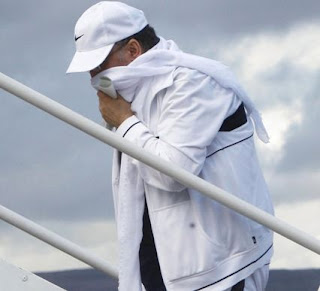 With the indignation of the Tories over the release of Abdelbaset Ali Mohamed Megrahi last month fresh in the memory, events are turning in a way that may give them cause to regret they went so far out on a limb.

The first of these events is a story in The Guardian and The Times which report that Megrahi has published the papers he believes would have secured his release on appeal. Helpfully linked, this is a 300-page dossier which, the paper says, "challenges key planks of the prosecution case".

One recalls at the time of Megrahi's release, Tim Montgomerie of Conservative Home, storming with indignation, posting this quote on his site:

It seems to me an utter perversion of the meaning of compassion, both in law and morality, to suggest that an unrepentant, mass murderer of entirely innocent human beings should not be required to end his life in prison.

That was followed in short order by a piece from David Lidington MP, shadow foreign affairs minister, under the heading: "Megrahi: The British people deserve to be told the truth."

Shortly afterwards, David Cameron had dived in, feet first, demanding an independent inquiry into the release of Megrahi, accusing Brown of double dealing.

That perhaps should have been lodged in the category "be careful what you wish for", because Megrahi's dossier is but the first instalment in a rush of documents which are going to re-open old wounds, going back to the Thatcher era and into the Major years, proving – as The New Statesman has recently averred - that Megrahi was framed.

This is by no means the first time such a charge has been laid, the bulk of the work having been carried out by the late Paul Foot in 1995, a summary of which he published in The Guardian in 2004, only a few months before he died.

One of the central characters in this dark and murky tale was Montgomerie's heroine, Margaret Thatcher. She initiated a series of actions which, in the most level of terms, can only be described as a perversion of the course of justice – one that ensured that the guilty parties escaped while a man innocent of that particular crime ended up in a Scottish prison.

It should be recalled that, in order to secure his release, Megrahi was pressured into abandoning his appeal. But it is also important to recall that the case had been referred to the appeal court in 2007 by the Scottish Criminal Cases Review Commission. Its chairman, Graham Forbes, then observed: "... based upon our lengthy investigations, the new evidence we have found and other evidence which was not before the trial court, that the applicant may have suffered a miscarriage of justice."

To have gained the support of the Commission, Megrahi's lawyers would have had to have presented some powerful evidence and it is some of that same evidence that has just now been published.

Combined with Foot's earlier, impeccable work, this takes the case way beyond "conspiracy theory" territory and lodges it firmly as an example of the utter degradation of the Scottish judiciary, and of the lengths to which the political establishments in Scotland and England will go to protect their own.

It requires no great leap of faith to believe that the real reason why Megrahi was released was precisely to prevent the appeal going ahead, when much of the evidence which has been so assiduously suppressed for the better part of two decades would have emerged in open court. With the prospect of Megrahi then being found innocent, the establishment went into overdrive in an attempt to ensure that the appeal was closed down.

Thus, when the Tories decided to extract what short-term political advantage they could gain out of Megrahi's release, they perhaps forgot something. Even if inadvertently, Brown, in seeking to keep embarrassing details out of the public domain - which would, of course, have reflected badly on himself and Tony Blair – was also protecting the reputations of both Thatcher and Major.

Having made such a fuss, however, the Tories have contributed to raising the profile of the issue to its current elevated state, negating the attempts to keep the it low-key. The affair now has the potential to wreck many reputations, and rightly so. Political perversion of the justice system, for whatever reasons – and there were many – is always unacceptable.

Now, some very plump chickens, it seems, are about to come storming home to roost. The Tories should have kept quiet.