Getting to the truth 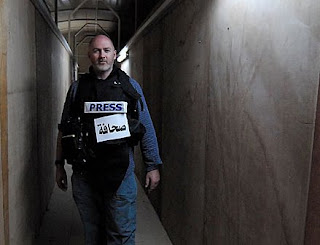 One should applaud the skill, planning and sheer bravery that went into to rescue this morning of New York Times journalist Stephen Farrell (pictured), and lament the death of a special forces soldier who died in the raid in order to secure his freedom and, most probably, save his life.

Reports, necessarily, are sketchy, but we are told that a British "commando" was killed in the pre-dawn raid, set up after Farrell and his Afghan interpreter, Mohammad Sultan, were kidnapped by the Taleban last Saturday after travelling to the site of the air strike near Kunduz in which up to 125 people were reported killed. Mohammed Sultan, unfortunately, was also killed in the raid.

Mr Farrell will now, undoubtedly, be fêted for his bravery and fortitude. Doubtless, he will dine out on his experiences for many a month and, in the fullness of time, launch a "best-selling" book, which will be lauded by his fellow hacks, who will heap praise upon him in a glowing series of reviews.

Small recognition will be given to the member of the special forces who died for his freedom – the man, as is the convention, will not even be named. And while Farrell undoubtedly takes risks, his courage is always tempered by the fact that, should he get himself into a predicament – as he did here – there are always men such as our anonymous special forces soldier, who are prepared to forefit their lives to extricate him.

One does not in any way denigrate Mr Farrell's own courage. We need journalists such as him who are prepared to put themselves at risk to gather information on the wars fought in our name. They are the foot soldiers in a different kind of battle, and they are an important part of the matrix from which we learn, and are able to build up an understanding – albeit imperfect – of what is going on.

This we noted in an earlier piece, when we applauded the efforts of Tom Coughlan, for his vivid reports from the front, putting himself at considerable risk in gathering his accounts.

But we would take issue with the comments of Stephen Grey, journalist and author of Operation Snakebite quoted – or perhaps misquoted – in The Daily Telegraph. He tells us, of Farrell, that: "He is the sort of person who realises that you have to get out of your comfort zone beyond the wire in order to work out the truth."

The issue here, of course, is the word "truth". Mr Farrell, any more than the rest of us, is not in a position to acquire that precious commodity. It is not there for the taking, but emerges only – if at all – from the labours of many, over a period of time. It is built on information from multifarious sources, needing most often the perspective which only time and distance can give.

As a custodian of the truth, in fact, Mr Farrell has a poor record. As a journalist in Iraq – where he was briefly kidnapped – he was one of the first to report on the growing power of the militias, reporting in May 2003, for The Times of the return to Iraq of Mohammed Bakr al Hakim, de facto leader of the Badr Corps, which was to give the British some grief in Basra.

Although Farrell continued covering the war in Iraq, reporting for The Times and subsequently for the New York Times, he was one of the many journalists who misread the signs and failed completely to understand the importance and political significance of Malki's operation Charge of the Knights in late March 2008.

Thus, in early April 2008 did Farrell, alongside his NYT colleague James Glanz, famously (mis)report that the "crackdown on the Mahdi Army militia is creating potentially destabilizing political and military tensions in Iraq."

Farrell, in common with many of his colleagues, from outside the "comfort zone beyond the wire", added much information on the situation – with some fine reporting and good follow-up, but missed the bigger picture.

No more now than then does any one journalist offer the "truth". But too many of them, from the narrow perspective they gain from being briefly at the sharp end, picking up part of the picture directly and thus contributing to the flow of information on which we all so much rely, believe they have a greater claim to being its custodian than perhaps is warranted.

And then, in the final analysis, the ultimate custodians are – for all their failings – the military. For only as a result of their bravery do the likes of Farrell live to tell their tales.