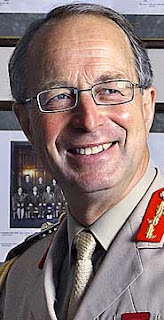 A Labour plot to smear the new head of the Army, General Sir David Richards, because of his daughter's "crime" of working for David Cameron, was exposed last night.

This, apparently, is on the basis that unnamed "sources" said they had heard from Eric Joyce that he had been "disturbed" to hear Labour colleagues discuss Sir David's 25-year-old daughter, Joanna Richards, who recently became Mr Cameron's diary secretary.

"Well-placed sources" say Mr Joyce feared Labour was preparing to deploy more smear tactics against General Richards if he stepped out of line like General Dannatt. "He heard talk of Richards' daughter working for the Tories and did not like it," said one source.

And that is the sum total of the "evidence" offered by the Mail on Sunday, allowing Tory defence spokesman Gerald Howarth to say of the "planned campaign" against General Dannatt's successor: "For Labour even to think about smearing General Richards and his daughter is absolutely despicable."

Can someone please tell me how they would characterise the evidential base offered by this paper, and what purpose is served by the conclusions drawn from it? The other interesting question is how many will believe this heavily-researched and well-authenticated piece of work, and repeat it verbatim, without any qualification?

As to the reality, Gen Richards is extremely highly regarded by ministers, is in constant contact with them and is working intensively on fleshing out the response to US Gen McChrystal's report on the Afghan strategy.