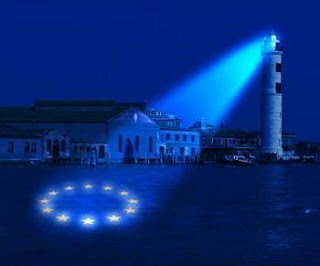 Probably the main reason why the debate on the European Union does not progress is the wilful refusal of the political classes to come to terms with the reality of what the EU is, and where its ambitions lie.

No better is this illustrated than by the current Telegraph leader which closes its dire, ill-informed series on "The State of Europe".

In one short paragraph, it tells us that, "the EU's origins lay in the rubble of the Second World War and in a laudable desire to develop an association in which free people could trade and thrive together after centuries of political tensions and catastrophic warfare."

Notwithstanding that the intellectual genesis lay in the aftermath of the First World War, the central myth which this newspaper perpetuates is that the ambitions of the founding fathers were limited and benign. Thus do we get the: "... laudable desire to develop an association in which free people could trade and thrive together ... ".

This ignores the very essence of the "project" which was to achieve political integration through economic means. This was the so-called "Monnet method", which recognised that the "peoples of Europe" would not accept the overt imposition of a unified European government. Therefore, the process had to be carried out step-by-step, each step leading to another in a mechanism which came to be called engrenage.

Ignoring this reality, though, the Telegraph goes on to say: "But the EU has become a vast, bureaucratic, unaccountable empire whose remit runs way beyond policing the common market." By this means, we are invited to believe that this current state is an unintended consequence and that, from its "laudable" beginnings, the EU has somehow gone off the rails.

We are therefore supposed to lament the fact that: "Its policies are made in secret, then insufficiently scrutinised in Brussels or national capitals. Yet its directives and regulations affect the lives of half a billion people." What is (deliberately) not acknowledged is that the system was designed to be secretive and opaque, otherwise it could never have achieved its aims.

Nevertheless, the newspaper, having indulged in its turgid exercise of woolly thinking about the EU, then exhibits a stunning lack of self-awareness by declaring: "It is time we were asked what we think about it."

But the fact is that the "project" is a deliberate attempt to create a supreme government of Europe, subordinating the national governments and imposing its rule of the peoples of Europe – whether they like it or not. If the newspaper had been at all honest in its treatment of the subject in the last weeks, it would have said precisely that – and there would be no need to ask us "what we think about it".

Hence, of course, the newspaper fudges the issue and offers faux euroscepticism, pretending that there is something to think about, something to consider, something to weigh up. There isn't. Membership of the EU is a one-way street to political integration and a government of Europe. If you want that, go for it. If you don't, we need to get out. But, for goodness sake, stop pretending there are any other options.