What they actually agreed 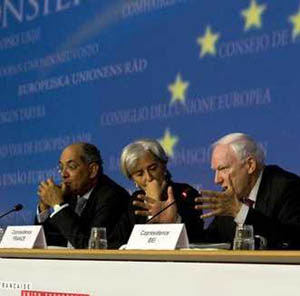 Our excitement at the EU's announcement on the "mark to market" rules was misplaced. All the Council did was endorse a very minor "clarification" to the existing rules, and call for this formally to be incorporated into EU law.

It is funny, but the only times we really get things seriously wrong on this blog are when we take media reports at face value, without checking the sources first. This we did when we wrote up our report from the The Guardian (online edition).

However, there is something of a difference between how the Council's move was reported, and what was agreed. Actually, it was not even a Guardian report – simply a cut-and-paste of a Reuters release. Just to remind you, the nub of what it said was:

EU finance ministers agreed to change how the mark-to-market rule is applied in the third quarter so that European banks are treated in the same way as their US competitors in the face of the worst financial crisis in 80 years.

Now the Council communiqué has been published online, we can see that what it says is very different. Opaque it is, but here are the relevant paragraphs:

We underline the necessity of avoiding any distortion of treatment between US and European banks due to differences in accounting rules. We take note of the flexibility in the application of mark to market valuation under IFRS as outlined in recent guidance from the IASB. Ecofin strongly recommends that supervisors and auditors in the EU apply this new guidance immediately.

We also consider that the issue of asset reclassification must be resolved quickly. To this end, we urge the IASB and the FASB to work together on this issue and welcome the readiness of the Commission to bring forward appropriate measures as soon as possible. We expect this issue to be solved by the end of the month, with the objective to implement as of the third quarter, in accordance with the relevant procedures.

Thus, the Reuters report – or, at least, the headline - is fundamentally misleading. EU finance ministers have not "agreed to change how the mark-to-market rule is applied."

All the Council has done is "taken note" of a statement issued by the International Accounting Standards Board (IASB). That turns out to be a reference to another statement, this one issued by the US Securities and Exchange Commission (SEC) on 30 September. That offers additional guidance on how to measure "fair value" – the basis of mark to market valuations.

The IASB stresses that the "clarification" is not an amendment of the (US) legal code, reiterating that it is simply exactly what the SEC says it is, "additional guidance", and thus endorses it.

But this change was effectively handed down from the IASB - acting as an agent for the EU commission which gives its rulings legal effect. It thus already applies from 3 October, when the statement was issued. The Council has done nothing more than add its own endorsement – an endorsement which is entirely irrelevant.

As to substantive changes, there are none. In the second paragraph which we cite, the Council is saying that this very small part of the problem related to mark to market valuation "must be resolved quickly" - i.e., formally adopted into the EU legal code.

To this end, it says in part, "we urge the IASB and the FASB to work together on this issue." The IASB we have met before – the FASB is the Financial Accounting Standards Board, its US counterpart. It is already set on producing further clarification to the earlier clarification, so the Europeans are still behind the curve.

More importantly though, there is a very significant difference between the IASB and the FASB. The FASB is part of the US government and, together with the SEC, it has complete control over US standards and procedures, with the ability to place measures before Congress for enactment into legislation if need be.

On the other hand, the IASB is an independent non-profit organisation. It has no regulatory power but makes recommendations which are then adopted (with or without changes) by the EU commission before they become law – by way of Commission Regulations.

In that process, by the way, there are two EU bodies involved, the Accounting Regulatory Committee (known as the ARC) and Contact Committee. These actually do the detailed work for the commission.

The crucial thing here is that the IASB, the ARC and the Contact Committee, and then the Commission through its own regulatory process, can only deal with detailed accountancy procedures. These only implement what are known as the "pillar III" aspects of Basel II, not the whole of the agreement.

The rest is implemented via the Capital Adequacy Directive, which is not within the gift of the Commission to change directly (as opposed to a Commission Regulation, which it can). Changes to that must go through the tortuous procedure of getting approval from the Council and EU parliament, which can take years.

The point – which we made in our earlier post - is that the problem for the financial services industry lies not so much in the mark to market rules, per se, or in the "fair value" method of valuing assets. The real issue is the complex rules which require the structuring of debt and the risk assessment model applied. These are found in the Directive.

Thus, while the Council welcomes "the readiness of the Commission to bring forward appropriate measures as soon as possible," this is actually very limited in effect, as is its statement that, "We expect this issue to be solved by the end of the month, with the objective to implement as of the third quarter, in accordance with the relevant procedures."

The "issue" to which the Council is referring is not the Directive. This was clarified at the Council press conference (pictured). There, via Reuters, council president Christine tells us that they are indeed talking about adopting the SEC's "additional guidance" formally into EU law. "We feel this method should also be allowed to apply to establishments in Europe," she says.

This, when all is said and done, is nine tenths of nothing. It amounts to a very minor procedural change in the rules, one with very, very limited application. It certainly does not amount to either a suspension of, or a fundamental change to, the mark to market rules. It does not affect the basis of asset structuring or risk assessment.

Finally, to compound obfuscation with confusion, the Council seems uncertain of the "relevant procedures" to which it refers. We are told that the IASB meets in London on 13-17 October, ostensibly "to consider aligning its mark-to-market rule with changes made in the United States."

We are then told that, if the IASB "did not make the change," the EU commission would make a formal proposal "within days" for EU ministers to adopt. But the commission does not need Council approval for such a minor change.

Under the aegis of Regulation (EC) No 1606/2002, it has the delegated power to issue is own regulations, after consulting the Accounting Regulatory and Contact Committees, both of which are made up from member state officials. The Council is not in the loop.

Putting this all together, we cannot even complain that the Council has misrepresented the situation. We have been misled by an ambiguous headline. But if the EU has ducked the issue, it is probably because the rules are far too difficult and complex to change. That, though, is not without its penalties. It means that the problems inherent in the current regulatory system will remain unaddressed.

Meanwhile, as the Council was yesterday deciding to do next to nothing, the US Securities and Exchange Commission announced further developments on its study of "mark-to-market" accounting, "as authorized by Sec. 133 of the Emergency Economic Stabilization Act of 2008, signed into law by President Bush last Friday."

The study is due for completion by 2 January 2009 and will, undoubtedly, lead to fundamental improvements in the US system. It looks like the Americans will have the last laugh leaving the EU, as always, trailing in their wake.