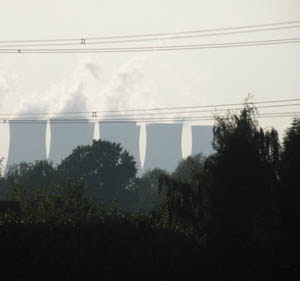 Crowding in on an already impossibly burdened news agenda, the greenies, euro-weenies and sundry other "climate vandals" will be out in force today, gathering in the Capital of Darkness (which yesterday, with the rest of Belgium suffered a general strike).

They will be there for what Reuters is calling "Super Tuesday", as the EU parliament in Brussels tries to ram through a record number of environment laws, thus attempting to deliver the coup de grass, so to speak, to the tottering economies of the EU member states.

During the morning session, MEPs will consider the EU parliament position on how the estimated €30 billion (but probably a lot more) from carbon allowances auctioned under the EU's emission trading scheme, should be spent.

Already highly controversial, with many member states – not least the UK – regarding this money as tax income, with each nation putting their take in their own general pots, the MEPs want the money hypothecated and spent on greenie projects like forest conservation, green technology development and funding "climate change" adaptation schemes in developing countries.

Other proposals on the table include partial exemptions of certain industries from the ETS scheme altogether, plus a blocking vote to try to prevent clean development mechanism carbon credits being used to offset EU emissions.

The big bone of contention, though, is how the burden of reducing carbon emissions to the EU’s 20 percent level will be shared amongst the different member states. That should keep the gathering throngs entertained for some time.

Then, in the afternoon, if there are any economies left to wreck, the MEPs will move on to deal with the madcap idea of carbon capture, and a proposal to throw public money at trial schemes in a bid to develop this technology for full-scale plants.

Buried in that will be a bid to make the generation of electricity from coal-fired plants conditional on their being fitted with carbon capture equipment, a none too subtle attempt to enforce the Greenpeace agenda and ban coal use altogether – or make its use prohibitively expensive.

The voting, says Reuters is not the parliament's final say, but it will set the tone for negotiations with "EU leaders" ahead of a final agreement seen later this year – they hope.

However, the greenies are not going to get it all their own way. A powerful coalition, led by Poland aims to block the package, not least because it would render Poland dangerously reliant on Russian gas to replace the coal it would not be allowed to use.

The refuseniks are getting some support from Germany with Frank-Walter Steinmeier, the German foreign minister, saying last week, "This [financial] crisis changes priorities … One cannot rule out that interest in protecting the climate will change because of such a crisis" – and that was before the current meltdown.

Nevertheless, attempts are being made to buy off Poland which, on past form, will make a lot of noise and then cave in. On the other hand though, if the MEPs pause for one moment to listen to what is happening in the real world, they might even back Poland and ditch this whole ridiculous charade.

The chances of that, though, are about as good as our still having a functional economy by the end of the week. However, we are always open to being pleasantly surprised amazed.