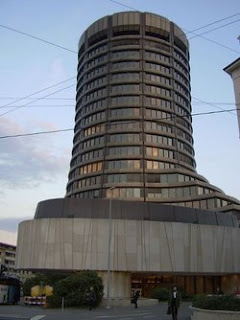 By general accord, much of the current financial crisis arises from "regulatory failure", something to which numerous references have been made, not least by the shadow chancellor over the weekend, when he complained that "Gordon Brown's regulatory mechanism has comprehensively failed".

Osborne has though been reticent about identifying the specific failure and it took his boss David Cameron yesterday to hint at the specifics. There is a need, he said, "to break the self-fulfilling cycle that is reducing banks' ability to lend." The problem is this, he added:

Cameron himself, however, blurs over the precise cause of this problem and it took The Guardian to add more detail. The paper tells us:

A European Union directive passed in 2001 and adopted as a new accounting standard in the UK in 2006 dictates that banks have to value their assets on a daily basis. To do this they must base their calculations on the market value of each asset if it were liquidated that day. The problem with this is that as share values tumble in response to the credit crisis, millions of pounds are wiped off bank balance sheets causing a spiral of decline in asset values.

Actually, The Guardian has got it wrong. The "European Union Directive" in question is Directive 2006/49/EC of 14 June 2006 "on the capital adequacy of investment firms and credit institutions". Its short title is the Capital Adequacy Directive. This must be read in conjunction with Directive 2006/48/EC, the pair of Directives together implmenting the agreement.

That it is an EU directive, though, does not tell the whole story for it is this directive which implements crucial parts of the now notorious Basel II agreement. It is that agreement that which is the heart of the current problems which the banks are experiencing.

That Basel II is the problem – the "smoking gun", so to speak - has been widely promulgated for some time by acknowledged experts, most notably last December by Prof. Peter Spencer, of the Ernst & Young Item Club, regarded as "one of Britain's leading economists". It was then that a report of his views said:

…conflicts caused by the Basel system of banking regulations, which determine how much capital banks must raise to keep their books in order, are the root cause of the crunch and were serving to worsen the City's plight.

The regulations meant that banks forced to take off-balance sheet assets from troubled structured investment vehicles on to their books had little choice but either to raise money from abroad or cut back dramatically on their spending, he said.

He warned that, if London's money markets remained frozen and the authorities retain the strict Basel regulations, the full scale of the eventual credit crunch and economic slump could be "disastrous".

Dismissing the assumption that banks are not lending to each other on the money markets because they lack confidence in each others' potential solvency, he argued that they were, in practice, prevented from lending the cash at all because it could leave their balance sheets falling foul of the Basel regulations.

"If these funding routes are not reopened it will have massive consequences for the economy as a whole," he said. "It will make 1929 look like a walk in the park."

He dismissed as "window dressing" the move announced by central banks around the world this week to pump extra money into the money markets and increase the type of collateral they will accept in return, in an effort to get them running again.

"This won't get to the core of the problem: the fundamental lack of collateral. As these problems drag on, the consequences for the macro-economy of not relaxing [the Basel regulations] are unthinkable."

Not only do the regulations, which stipulate that banks must have a minimum of 8pc capital among their liabilities, deter banks from lending to each other, they will also limit the amount they can lend to households and businesses. This could escalate the anticipated economic downturn next year significantly, he said.

This theme was picked up by Ambrose Evans-Pritchard a few days later, who cited Spencer saying that, "the global authorities have just weeks to get this right, or trigger disaster."

The Spencer analysis was then essentially repeated at the end of January by another acknowledged expert, Prof. Tim Congdon.

In the context of the Northern Rock affair, Congdon asserted that, "the Basel rules have failed", then arguing that "the scientific precision of the Basel rules was shown to be hocus-pocus." Banks, he wrote:

…did not know the true state of each other's capital and, hence, their ability to repay loans. Inter-bank markets seized up. If one bank - such as Northern Rock - ran out of cash, it had only one place to go, its central bank. But the assumption that the central bank would, quickly and reliably, extend a lender-of-last-resort loan to a solvent, but illiquid bank - an assumption written into banking textbooks for decades - was invalidated by the Bank of England's reluctance to lend in crisis circumstances last August.

So it was yesterday that Cameron stood up in front of the Conservative Party conference and declared that "…our regulatory authorities, together with the European regulators, need to address this difficult issue."

He did not name the Basel II agreement and, crucially, neither did he identify the more immediate cause of the problem, the EU Capital Adequacy Directive. Had he done so, of course, there would have been uproar, and the EU would have been catapulted to the top of the political agenda, which is the last thing Cameron would have wanted.

And it is the Directive which is now the problem. The reason for this is that, although the original Basel II agreement was produced in June 2004 with the assent of the British authorities – which had pushed hard to their adoption – the sponsoring organisation, the Basel Committee on Banking Supervision does not produce legislation.

Instead, it "formulates broad supervisory standards and guidelines" and recommends statements of best practice in banking supervision "in the expectation that member authorities and other nations' authorities will take steps to implement them through their own national systems, whether in statutory form or otherwise."

Had the UK been an independent country in 2004 and subsequently, the government would have implemented the Basel II agreement into UK legislation, either through an Act of Parliament or through Regulations (SIs) – or a combination of both.

The trouble was that, not only was the UK a member of the European Union, financial services regulation was (and is) a "competence" of the EU and the UK had thereby ceded authority to legislate in this area. Thus, instead of being adopted into British law directly, it was adopted via an EU Directive.

That, at the time, did not present the government with a problem as it has been an enthusiastic supporter of the agreement. But, now that the flaws in the agreement have been exposed, or shown to be "hocus-pocus" as Congdon maintains, the provisions cannot be changed unilaterally by the British government. They are now part of EU law so, in order to achieve change, all we can do, as Cameron euphemistically put it, is have "…our regulatory authorities, together with the European regulators," address "this difficult issue."

And that equivocation is also part of the problem. One might ask why, if Cameron is now so (rightly) certain as to where the problem lies, his shadow chancellor has not raised it before.

To be fair to him, he has. He raised it on 21 April 2008 in the House of Commons in response to a statement by Alistair Darling on "financial stability". But it was only one sentence where he told Darling that the moves he had announced "should include reforms to the Basel accords."

Then, in a Newsnight interview on 17 September, just a few days ago, he mentioned it again, a reference which met with the approval of Telegraph columnist Gerald Warner, who noted:

Osborne did not overreact to the crisis by rushing to propose a host of regulations to monitor the stable door now that the horse has bolted. Instead, he proposed revisiting the Basel II Accord, which is now four years old.

Thus, while Osborne has belatedly come to the view shared by Spencer and Congdon, and evidently passed this view to his boss, neither he nor Cameron have mentioned Directive 2006/49/EC, nor even the European Union. Yet it is the Directive which must be changed.

Yesterday, Cameron entitled his speech, "Together we will find a way through". What he did not specify, however, was how he was going to "find a way through" the EU labyrinth to remove a damaging piece of legislation that is at the heart of this crisis.

Thus, while Osborne is accusing Labour of being "in denial" over its role in the financial crisis, the Conservatives too are indulging in their own form of denial.

The elephant has re-acquired its cloak of invisibility.

The picture shows the headquarters of the Bank for International Settlements in Basel, which hosts the Basel Committee on Banking Supervision meetings.