The driver quits the train 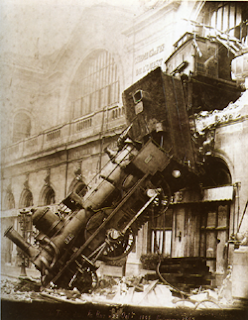 The real experts in the business seem to be saying that the thing to watch as this crisis unfolds is the inter-bank lending. It is, after all, the seizure of the credit market that is at the heart of the problem.

In this context, an index that, if we were honest, very few of us knew much about even a few days ago, suddenly assumes crucial importance – that is the Libor (London interbank offered rate).

If Brown's EU-approved bank rescue package starts to work, it is here that the first signs will be seen. Even before the package is fully up and running (which it is not yet) one would expect it to have a "halo effect" on that magical mystical creature "sentiment".

But bankers, when it comes down to it are an unsentimental lot – brutal, in fact. We saw yesterday that the immediate response was to mark up slightly the crucial three-month rate. And so it is again today.

In a headline that is horribly understated, Bloomberg reports: "Libor for three-month dollars rises as cash injections misfire."

That one word "misfire" is a deadly shorthand for saying that Mr Brown's (EU-approved) rescue package definitely isn't working. The rate climbed again today, this time by seven basis points to 4.82 percent.

"Central banks are trying to supply liquidity, and in many cases it just comes back to them," says Robin Marshall, director of international fixed income in London at NCL Smith & Williamson – cited by Bloomberg. "There's a real problem in getting people to put their money to work. The fear of counterparty risk is so intense that the only bank prepared to lend at the moment is the central bank," he adds.

"You just don't know whether the person you're lending to is going to be the guy that has the weak balance sheet and is going to fall over," says Sally Auld, an interest-rate strategist at JPMorgan Securities Australia Ltd in Sydney. "What markets are telling you is that it doesn't matter what central banks and governments do."

That last comment says it all. To a very great extent, governments seem to be bystanders in this unfolding crisis, the adverse sentiment being driven by the increasing realisation that they have lost control.

For those of us who are rank amateurs in the technicalities of this field, that itself is the most worrying thing. You don't have to be an expert to realise that, when the train driver leaps from the cab of the runaway train, we're all in trouble.