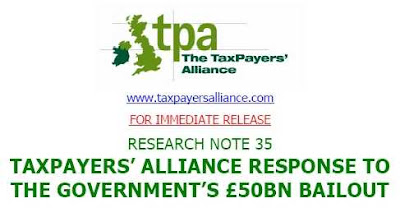 A day after the government announced its bank rescue plan, the Taxpayers' Alliance (TPA) has come up with a report, trailed on its website, telling it what it should have done.

Rightly – although a bit late coming after the event – the Alliance suggests as its very first item that the government should consider, "Suspending mark to market rules that cannot function effectively in the absence of a liquid market for many key assets." Helpfully, it also supports its argument by telling us that had these rules been in place during the 1980s, all ten of the largest US banks would have become insolvent.

So far so good, but you have to get to page six of the eight-page report before you find an acknowledgement that:

Mark to market regulation has been enacted in the UK through EU regulations. This may mean that it will be difficult to quickly suspend mark to market. The EU institutions will need to move more quickly than they do in other areas to avoid being a liability in attempts to get out of the credit crunch.

However, in a "puff" for the report, on the Centre Right blog, TPA policy analyst Matthew Sinclair is slightly more up-front. He states there: "suspending mark to market regulation requires swift action to secure changes at the EU level (easier said than done, of course)." This is, to say the very least, an understatement. In fact, it is not possible and it is there that the report goes dreadfully wrong.

The first problem is that the rules in their entirety are enacted in the UK through EU (commission) regulations and directives the latter having been transposed into UK law – the former having direct effect.

While the commission could repeal its own regulations fairly quickly, it could not deal with the directives with any speed at all. As we have pointed out several times, this process could take months, even years. Thus, at the first hurdle, the TPA falls, calling for something that is not within the gift of the EU to deliver.

However, that would be the case even if the commission was disposed to make changes. But the fact of the matter is that it is not.

Having followed the twists and turns of this saga – which the TPA clearly has not – we picked up at the weekend that Sarkozy's minister for European affairs, Jean-Pierre Jouyet, had told the financial daily Les Echos that European governments "must revisit accounting rules including the mark-to-market procedure …". The rules, therefore, were very much on the agenda for the Paris "summit" that Saturday.

After the event, though, we learnt from the New York Times that the idea of any significant revision had been rejected. That Sarkozy himself had been advocating change came from Accountancy Age which told us: "the weekend saw French president Nicholas Sarkozy host a summit in which he dropped his own preference for suspending fair value" (the alternative name for mark to market).

The NYT itself reported that, "although Mr. Sarkozy said it was time 'literally to rebuild the foundations of the financial systems', the steps announced were more modest." It was then that we got the first hint that the EU was going to consider only a very minor, essentially cosmetic change.

That stance was formalised at the Ecofin meeting last Tuesday which, as we later indicated affirmed that the EU had set its face against any structural reforms of the regulatory system – mark to market rules included.

Coming up now with its "suggestion", therefore, the TPA is so far behind the curve that all it has managed to demonstrate – to those that have followed the issue – its ignorance of events and the way our government in Brussels works.

More importantly, the TPA do not seem to have considered the possibility that the government did consider suspending mark to market, and have already rejected it. Basically, as the Alliance quite rightly argues, this would have been a much better alternative than throwing public money at the problem, which – if current indications are any guide – is unlikely to work.

But, with the EU setting its face against that option, and with the EU then setting the parameters for any rescue plan, which we highlighted in this post and this one, all the evidence points to the singular fact that the government took the action it did because that was the only option which the EU would permit. Any other course of action would have put the government on a collision course with the EU – as would any attempt now to implement the TPA's suggestion.

Why the TPA thinks it is a good idea to suggest something that cannot be done and will not be done, is anyone's guess. But, to convey the situation more realistically would require perhaps a much better grasp of the situation that the researchers are capable of developing, and would also require a recognition of just how powerless this country really is.

That puts us in the territory of the politics of denial which for the TPA seems to be familiar territory.