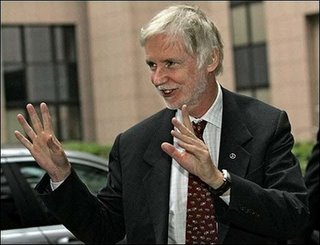 Now is the time, surely, for the European Union to display the effectiveness of soft power, to speak with one voice, to show that it has a strong presence on the international scene. But then, we say that every time there is an international crisis (and they do come thick and fast) and every time we look around and see nothing.

Once more we have to point out the bleedin' obvious: there can be no common foreign policy if there are no common interests.

Still, let us have a look at what the Europeans have been up to. The presidency of the European Union rests with Finland at the moment (and I bet they wish it didn’t). Thus, it fell to Finnish Foreign Minister Erkki Tuomioja to chair the emergency session and to come up with some pointless platitudes.

The EU, he told reporters, must make a united stand, even if it means breaking with the United States on the issue of what is to happen in southern Lebanon. Of course, if the EU paid a little less attention to what the United States is doing, in order to stand up to it, and a little more attention to what is going on in the region they are talking about, that famous common foreign policy might emerge. Or not.

Breaking with the American stance, which is, roughly speaking, that Israel has a right to defend itself and that the problem must be solved on a more long-term basis than just an immediate cease-fire that is unlikely to be kept by Hezbollah, in any case, presumably means speaking up against Israel. Does that mean that the united stand and strong voice will be for Hezbollah? Well, up to a point.

“It is unacceptable for Israel to continue with its current policy. The words of Mr (Prime Minister Ehud) Olmert and his plans for further military attacks (are) concerning and we have this message to him: it is unlikely to bring military success, it will only fuel the support for Hizbollah and other extremists in the region.”

Well, that’s as may be. So far, support for Hezbollah has been muted in the region, many Arabs and Arab governments fearing the organization’s sponsor, Iran, more even than hating Israel. In any case, what precisely, does Mr Tuomija suggest?

It seems that the EU is about to put pressure on Israel, otherwise its credibility will be in question (don’t snigger, please) to have a cease-fire and then get involved in a long-term political solution. Or so EU External Relations Commissioner Benita Ferrero-Waldner told Reuters.

Yes, but what then? How is the EU going to ensure that the cease-fire is maintained and that Hezbollah is disarmed? Are they going to send in troops to maintain peace on the border? Are they going to sit back and say, well, it will all turn out all right at the end and wring their hands when it does not?

Italian Foreign Minister, Massimo d’Alema, has no doubts on the subject:

How nice for the international community, which has no troops with which to participate anyway. Unfortunately, Israel does not have that choice.

As it happens, the EU is not alone in calling for a ceasefire. It would appear that the Organization of the Islamic Conference intends to do the same, according to the Malaysian Foreign Affairs Ministry. The Malaysian Prime Minister Abdullah Ahmad Badawi is the present chairman of the OIC and he has called an emergency meeting for August 3. Crisis? What crisis?

Meanwhile the various European countries have been making statements.

Given the Italian Foreign Minister’s comments, Italy may not be considering these matters all that hard. In any case, the international force, the only thing according to Israeli Prime Minister, Ehmud Olmert, that will bring about that much coveted cease fire has to be under UN auspices. Or so everyone seems to agree. The trouble is that the UN has no auspices. The Security Council met yesterday to discuss matters and adjourned sine die to analyze at leisure what the political standing of that international force will be.

German Chancellor Angela Merkel seems unable to make up her mind whether Germany will send troops if asked by all sides and as part of an international force or whether the country’s armed forces are severely overstretched. The latter is more likely to be true.

Britain and the United States have already ruled themselves out of the game, in this case that of “What’s the time Mr Wolf?”. Poland has troops in Iraq and Afghanistan and is unlikely to produce any significant numbers for yet another far-off war. (And who knows how long the Polish government will be in place?)

“The force must be larger than the current UN Interim Force in Lebanon and be more than the 10,000 suggested by UN Secretary-General Kofi Annan, French Defense Minister Michele Alliot-Marie said in an interview published on Tuesday. Military officials in France have said the new Lebanon force should be 15,000-20,000 strong. "There is no question of it being a UNIFIL Mark Two," Alliot-Marie told Le Monde daily.

"It must be a very large international force with very precise missions. It must be well-armed, have substantial firepower and armor. It must be credible and capable of making itself respected by everyone," she added.

So where are those numbers of troops going to come from, especially as, according to Mme Alliot-Marie, the international force must be given the right to fire if it should be seen as necessary? Which country is going to send troops into that quagmire (I use the word advisedly)?

There is even some doubt as to what France can contribute despite Mme Alliot-Marie’s fighting words:

“Only countries with real military know-how should take part in the force, which should avoid becoming a kaleidoscope of nations that would lose its effectiveness, she said. Military experts say France, which already has some 13,000 service personnel deployed abroad, could send around 5,000 troops to Lebanon, but the French daily Le Figaro said Monday that military planners felt the country was reaching its limit.

"It won't be easy. We've reached our deployment limit now, not so much in terms of numbers of personnel but in terms of command capacity," the paper quoted one officer as saying.” 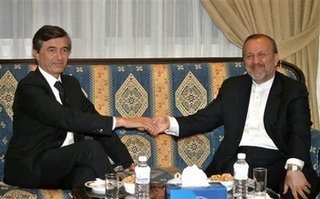 Meanwhile we have seen another very fine example of French diplomacy. The Syrian, Iranian and French Foreign Ministers are supposed to meet in Damascus. The last two have already met and shaken hands in Beirut.

Philippe Douste-Blazy was full of praise for Iran and her role in the Middle East:

"In the region there is of course a country such as Iran - a great country, a great people and a great civilization which is respected and which plays a stabilizing role in the region," he told a news conference.”

One can argue about the great civilization, in particular its timing, but there can be no argument about the “stabilizing role”. Iran has made no secret of its support for Hezbollah, for Shi’ite militias in Iraq or of its desire to obliterate Israel.

On Sunday Reuters published the following:

“Iran's hardline forces should get ready to take revenge on Israel and the United States for the offensive on Lebanon, the head of the Revolutionary Guards was quoted as saying on Sunday.

"The Basij and Revolutionary Guards should prepare to get even with the Zionists and Americans," Yahya Rahim-Safavi was quoted as telling Islamic militiamen by the conservative Fars news agency.

The Basij are volunteer Islamic militiamen.

"The timing of the this will be announced by the leader," he added.”

Later on, Fars, the Iranian news agency that has access to the hard line military units, announced that those quotations were being withdrawn, though it is not clear by whom.

Meanwhile, the EU has condemned unreservedly the strike at Qana, naturally enough without bothering to investigate the growing number of questions about it, and all attacks on “innocent civilians” (though not Israeli ones, who are, presumably never “innocent”). And to add to the convoluted picture, the European Parliament has supported the Finnish Presidency’s call for an immediate cease-fire. No, since you ask, they have no idea how it can be achieved or what might happen afterwards.

In any case, that famous united stand is as elusive as ever. While the EU has issued a draft statement, which calls for an immediate cease-fire, Britain, Germany and the Czech Republic have promptly rejected it, announcing that they, too, would like to see a cease-fire but do not want a definite timeframe.

Just another crisis in the creation of the strong European voice on the world stage.