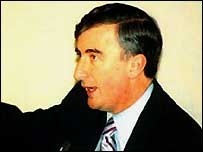 According to what might be the greatest book of English and British history “1066 And All That”, Mr Gladstone’s sole aim was to solve the Irish Question but the Irish cheated: every time he came near to doing just that, they changed the Question. For those of us who are old enough to have studied history at school that remains the best description of the endless toing and froing over Ireland in the second half of the nineteenth and early twentieth century.

The creation of the Irish Free State appeared to solve the Question but it left Britain with the Ulster Problem and I am not going to spend the next three hours trying, rather ineffectually, I suspect, to analyze that.

One would think that with both Britain and Ireland being members of the European Union, a transnational organization devoted to the destruction of existing national states and creating a new one, that of a common European State (super or otherwise) would have put pay to all that discussion and the constant changing of the Question. Let’s face it, the EU will have its work cut out with the Transylvanian Question once Romania is part of it.

It seems, we have underestimated Irish tenaciousness. A good Question is not to be discarded just because centuries have gone by and fruitless battles have been waged.

According to the BBC, Gay Mitchell, a member of the Irish Parliament and of the European Parliament, made what turned out to be inflammatory remarks at the annual Fine Gael Collins-Griffith Memorial in Dublin on Sunday. 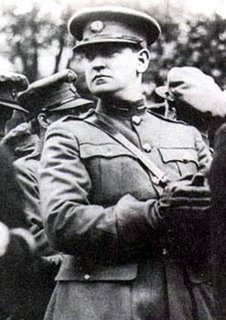 (It is, perhaps, worth noting that the two men commemorated are Arthur Griffith, the first President of the Irish Free State, who died in 1922 because of stress brought on by the country’s indubitable slide into an extremely bloody civil war and Michael Collins, the leader of the IRA who signed the treaty with the British Government and immediately started undermining it, though this remained unknown to many of his erstwhile comrades. Collins was planning to launch a guerrilla war in Northern Ireland but was distracted by that civil war and was clearly involved in the assassination of Sir Henry Wilson. Despite all this, as Sellars and Yeatman might have said, he was assassinated by disgruntled IRA members 10 days after Griffith’s death. Oh dear, I wasn’t going to go into Irish history.)

Anyway, what did Mr Mitchell say that annoyed everyone so much?

“As a constitutional nationalist, he was interested in looking at Ireland's relationship with NI's unionist population, he said.

He widened his argument to ask what role the British monarchy would have if a united Ireland came about by consent.

"Are we prepared to actually think out of the box and say, well how - if this is to come about - it will be accommodated," he asked.

"Or alternatively, are we saying that we are abdicating solely to Provisional Sinn Fein, the role of being advocates for a united Ireland in the Republic?

"I think that would be a disastrous thing to do."”

Needless to say, Sinn Fein condemned the remarks immediately as did the DUP and these are the only two parties that count for anything in Northern Ireland.

My question remains similar to the one at the beginning of this posting. Mr Mitchell is musing about a united Ireland brought about by consent (another instalment from “Tales of Porcine Aviation”). Is that not rather a passé notion in the brave new world of the European Union? And should Mr Mitchell, as an MEP, not know this fact?