Now we can all sleep soundly 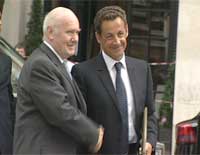 Anyone worried about the alleged terrorist plot and the ways of dealing with it should desist immediately. BAA may have caused absolute mayhem and showed that it has no plans for dealing with what is a very likely emergency. The Leader of the Opposition may have felt that he was called upon to pontificate in a wandering-aimlessly-round-and-round sort of fashion.

Fear not, the real work is being done. John Reid has chaired a meeting of five other EU ministers of interior during which various ideas were discussed as to how the situation can be dealt with.

As ever, when anything happens, the first proposal was to push faster towards an integrated anti-terrorist policy. Then it was reduced to a few more concentrated ideas:

I am not really certain what any of this means. After all, liquid explosives are not precisely legal even now and how one tackles them remains something of a mystery, though both Franco Frattini and Wolfgang Schäuble have called for something to be done about them.

One assumes that there is exchange of intelligence and co-ordination of transport security is already in place and not just involving terrorism. In fact, last week’s operation seems to have been carried out with the involvement of many other security services, European and others.

As for the nature or European Islam, that appears to me to be much too wide and difficult subject for the average minister interior or his minions to tackle.

On the other hand, ministers of interior are getting above their station if the BBC report is to be believed:

“But he [John Reid] said the presence of five other interior ministers and top EU officials symbolised Europe's determination to stand together and defend their values.”

Clearly, “values”, undefined, is going to be the buzzword for a while.