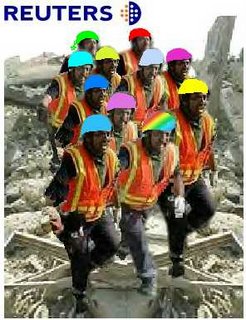 We are informed that Stern Magazine in Germany is running a long story tomorrow, carrying an interview with "Green Helmet". The contents page entitles the piece:

Apparently, his name is Ist Salam Daher and, according to a one report from a reader, he claims to be have been a rescue worker for ten years. He is a father of three children and claims he is "no hezbollah-guy". We are told he says that he showed one dead child to the photographers in Qana "in order to get rid of them."

We've been promised a translation of the article and we'll reserve comment until we've seen it.

Meanwhile, Michelle Malkin has some superb examples of staging photography, plus links to other sites.