Back to the real world 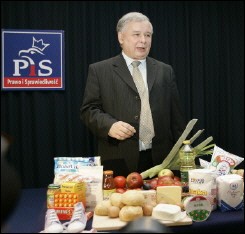 It had to happen. We had to return to the real world of shenanigans in the European Union. Naturally, foreign policy will remain one of our issues but for the moment, let us concentrate on another hullabaloo in Poland (if you can call it the real world).

It all started a few days ago, when President Lech Kaczynski, tired perhaps of his fruitless row with a German left-wing newspaper, announced that the EU should start discussing the re-introduction of capital punishment. Just to remind all our readers, abolition of capital punishment is a pre-requisite of EU membership (as well as of Council of Europe membership). Having abolished it and joined the EU, Poland now finds that even if there were a vote in the country for its reintroduction (and it is not clear that this would happen) the government could not do so without the EU’s say-so.

Both the Law and Justice Party and the League of Polish Families maintain that reintroduction (or, at least, the possibility of it) of capital punishment, like tightening anti-abortion rules, is part of the Catholic Church’s teaching. Sadly, the Church does not agree on capital punishment.

“Father Piotr Mazurkiewicz from the Catholic University of Cardinal Stefan Wyszynski in Warsaw argues that such an idea runs in a different direct than the present values of the Catholic Church.

’There is a traditional teaching of the church in which the capital punishment is part. The teaching has been altered by John Paul II and now the Catholic Church supports the forces aiming to eliminate capital punishment. So we can say this initiative is going the opposite way to the teachings of the church. This kind of initiatives have political reasons- it is not going from religious motives or ethical ones but from political ones.’”

Unsurprisingly, the whole subject was dismissed by the European Commission, sometimes erroneously described as the EU “Executive” (it is, as we know, both the executive and the sole source of legislation in the EU):

“The European Union has brushed off a call from Poland's conservative president, Lech Kaczynshi, for the 25-member bloc to consider re-instating capital punishment. "The death penalty is not compatible with European values," European Commission spokesman, Steffan de Rynck, was quoted as telling reporters on Thursday.”

The most obvious explanation for it all is the nearness of another Polish election and the need to position oneself that both members of the ruling coalition realize. So, it is not clear whether they will include restoration of capital punishment or a referendum on it in their manifesto. Or, for that matter, how they are going to finesse that with the threat of expulsion from the EU (all those sponduliks are hard to discard).

In the meantime, without pronouncing on the rights and wrongs of capital punishment itself (I do not propose to acknowledge any comments on the subject on the forum, as this is not part of the blog’s remit), one can speculate about the notion that the death penalty is not compatible with “European values”.

For almost all of Europe’s history the death penalty was in existence and was considered to be perfectly compatible with European and diverse national values. If there was a discussion it was about methods of administering the penalty and, above all, the crimes that deserved it. The idea that there is something wrong with the whole concept is relatively recent (though there were always individuals who held that view). What is Steffan de Rynck’s definition of “European values”, one wonders.