Death of a photographer who deserved the Pulitzer Prize 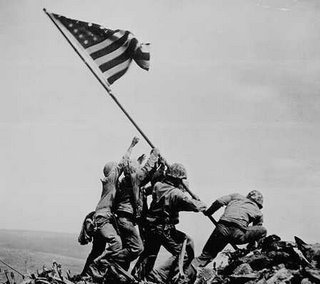 Not to be outdone in the war photography stakes, I have also decided to put up a short posting (please control that cheering at the back) on the subject but, as befits one who aspires to be an historian, my story goes back in time.

ABC News has announced the death, at the age of 94, of Joe Rosenthal, the man who won the Pulitzer Prize for one of the most famous photographs of the Second World War: the raising of the flag at Iwo Jima.

The photograph, taken on February 23, 1945 was actually that of a second flag raising, as the first flag was not deemed to be large enough. This had been decided before Rosenthal got there for reasons of military morale rather than the need to send a better picture. In a sense, one could argue that this, too, was an example of messing around with photographs, especially as it is the slightly cropped version that became famous rather than the original shot. 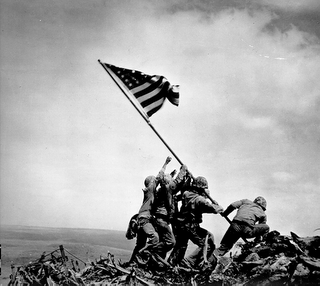 There is a slight difference, however. The Iwo Jima photograph, listed as no. 68 in a 1999 New York University survey of the 100 best examples of photojournalism of the century (goodness only knows what sins are buried in that survey), was never simply a news story.

The photo did not lie in the sense that Iwo Jima had been taken with a great deal of sacrifice. But what it really concentrated on is the effort and achievement of war and of the US Marine Corps, in particular.

“"What I see behind the photo is what it took to get up to those heights the kind of devotion to their country that those young men had, and the sacrifices they made," Rosenthal once said. "I take some gratification in being a little part of what the U.S. stands for."”

One wonders whether any of AP’s photographers would agree with that or, even, believe in it.

The photograph was the basis for the Marine memorial in Washington DC, officially dedicated by President Dwight D. Eisenhower on November 10, 1954, the 179th anniversary of the U.S. Marine Corps.

Its influence was shown in another, more recent iconic photograph: that of the three firemen raising the Stars and Stripes over the rubble that had been the World Trade Centre.