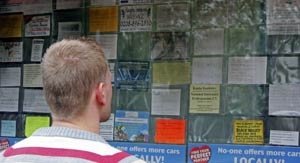 Even though I am still coming up for air after spending more than three weeks on my "Qanagate report" (would you believe 84 pages when I printed it all out, with 173 illustrations?), even I managed to notice that there was a certain amount of interest in immigration over the last 24 hours.

This, I gathered, had something to do with the release by the government of official figure, recording that half a million East (and Central) Europeans had applied for work in Britain during the last two years – i.e., since EU enlargement.

In today’s edition, The Times is chuntering on about this, as is the Mirror and sundry other newspapers. The Beeb had its go yesterday, devoting most of its Radio 4 World Tonight newscast to the issue.

The influx, we are told, is much greater than the Government's prediction of 15,000 immigrants per year and the actual number of workers from these countries is likely to be higher still since the figures do not include self-employed people like builders or plumbers, who do not have to join a workers' registration scheme.

Tony McNulty, the immigration minister, said estimates that included self-employed people would put the total number of from immigrants from the so-called "A8" nations nearer to 600,000.

But, if those are the bald figures, what we have not heard or seen anywhere from the media is why it is happening, and why this mass migration was both inevitable and predictable, once these countries entered the European Union.

Classically, this is in fact a problem of agriculture, about which we wrote in December last year. And this is a problem as old as the hills.

Basically, something like 25 percent of Poland's 40 million population is dependent for its income on the land – 10 million or so people - and other enlargement countries have similar ratios. Yet, in a modern economy, this is unsustainable. Agriculture, typically, can only support between 2-4 percent (in Britain it is lower), and then only with considerable protection and subsidy.

In joining the EU, the enlargement countries – as expected – have been forced into a massive programme of rationalising their farming industries, which means that people are being forced off the land as rural employment declines.

The same rationalisation occurred in the UK during the 18th and 19th Centuries but, fortunately for us, this coincided with the industrial revolution, which soaked up the excess labour and kept it productive.

France had something of a similar problem, although it came late – in the 1950s and 60s. It was this which prompted de Gaulle to fight for the CAP, subsidising farmers to keep them on the land and thus slow down the movement from country to city, making it more managable.

But, in the 1999 enlargement settlement (the so-called "Agenda 2000"), existing member states refused this option, cutting back on the entitlement for enlargement countries and then changing the rules which made it more difficult to apply for the funds that were available.

Caught in this classic squeeze, there is only one answer for the economically active population – migration. The ridiculous thing is that this was so predictable that, back in 2003, Booker and I wrote about it in our book, The Great Deception. I pulled off the original text from my files, and this is what we wrote:

Unlike the French back in the 1960s, the Poles were not to get a cushion for their peasantry. They were to be exposed to the full force of competition from highly-subsidised EU produce, transported faster and cheaper down the Trans-European Network to Warsaw than many local farmers could hope to compete with. The only result could be an accelerated drift to the cities. Yet, the EU had also forced the "rationalisation" of Poland's core industries, such as steel, intensifying already serious unemployment and wiping out any potential jobs for the dispossessed farmers.

Emigration would be the only option, something foreseen by the existing EU member states, most of which had refused to allow rights of establishment for seven years. But not so Britain. Following Ireland’s lead, she would allow entry to the eastern Europeans from day one of their accession. Furthermore, they would have the same entitlements to benefits, health care and education as UK nationals. The Home Office believed that only 5,000 to 13,000 would take advantage of this, but Migration Watch UK, a specialist think tank, warned that the UK could be facing 2.1 million immigrants by the year 2021.

That is exactly what is coming to pass. To try and stop it, without dealing with the core issue – agricultural subsidies – is like Canute trying to stop the tide coming in. He knew it could not be done and wiser heads know that this wave of migration – for good or bad – cannot be checked under the current regime.

But, as I observed, nothing of this is discussed by the media. I doubt there is a great conspiracy though. This is just another of those all too common examples of the ignorance and lack of professionalism that passes for journalism these days.

Whether it is the Middle East, foreign affairs generally, domestic or EU affairs, the very last thing you can do is rely on the media for an honest or intelligent appraisal of current events. Through their lame and often trivial efforts, they let the governments of the day off the hook and, in so doing, become part of the problem. Standing between us and the government and still dominating the debate and filtering out alternative views, they hinder understanding and the accountability that comes with it.

They the media, therefore, are not so much the enemy within – they are the enemy between.