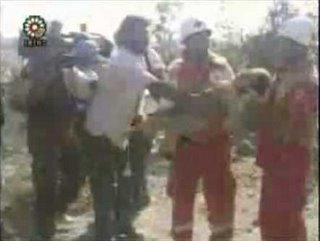 We have been sent some important new video footage which has enabled me to update the "Qanagate" report. So far, I have made significant changes to Part 4 – Red Cross workers, adding three sequences.

The first shows Green Helmet stopping a Red Cross worker from evacuating the body of a girl, telling him to put it on a stretcher – whence it is used for a number of staged scenes.

The second, shown above, expands scene 2. It actually shows a Red Cross worker being placed at the location. Only once his "minders" are satisfied with the positioning does the bearded man in the white shirt - acting as the "prop master" - hand him the body of the child. Another Red Cross worker to his side takes hold of the head, in what is evidently a pre-arranged pose, the pair acting as a duo. 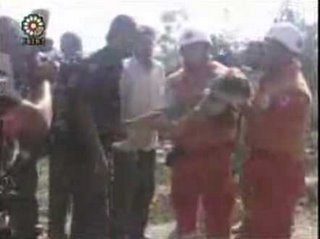 Now that the actors are in place, with the "prop" suitably position, "Black baseball cap" moves in to check the arrangements and give last minute instructions to the actors. Then, as is shown in the report, the actors march off in front of the cameras to give their ghoulish display.

The third addition supplements an already published still frame from AP's Nasser Nasser. Apparently showing an "action shot" with Nasser claiming to show Red Cross workers carrying away a body, the video footage actually shows the workers stationary for many seconds, posing for the shot.

We have other material which we are still processing and will have to add to other sections of the report. Each time, the case strengthens - nothing so far in any way contradicts our original thesis that the bulk of the scenes at Khuraybah were staged.

Meanwhile, the rats continue to nibble at the edges. Two more attacks are up on the web, here and here. Both follow classic lines. The first attacks the author for having an "agenda" while the second lumps the EU Referendum material in with other work and then attacks the latter, damning ours by association. But neither address the substantive evidence offered by this blog.

The first of the pieces, by Greg Mitchell of the Editor & Publisher is now suplemented by a second. The man is in denial. Perhaps he should listen to the advice given to many a politician - when you're in a hole, stop digging.

As to ongoing changes, I have also amended the main graphic in Part 2 and we will keep you informed of further updates.