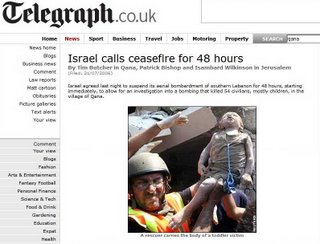 For those of you who might have thought that the unusual lack of posts in the blog has meant I've been taking time off – you were mistaken. I decided I must absolutely focus on finishing the definitive version of "The Corruption of the Media", otherwise it would never get done.

Barring any typos that are brought to my attention, the work is now finished and I will not be making any further corrections or additions to it. Now standing at 104 pages when printed out (up from 85) with 204 illustrations – plus links to others – this is the best I can do. I must now draw a line and move on.

That does not mean to say the issue is finished with – far from it. One reason for getting the report done (and for the substantial element of re-writing) was to be able to submit it with a complaint to the Press Complaints Commission. I formally lodged a complaint today, via the online system, citing The Daily Telegraph and enjoining the Guardian, The Independent and the Daily Mail.

Any developments on this, or on the "Qanagate" saga, I will post separately as and when, rather than add to the report.

One reason for focusing on The Daily Telegraph is the discovery that its web entry for the Qana story of 31 July now sports a picture of the "dead baby", taken by none other than Reuters' own Adnan Hajj, he of photoshopping fame (see top illustration - double-click to enlarge). 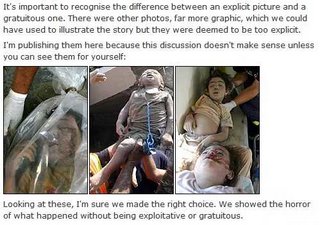 This comes after web editor Shane Richmond wrote a self-regarding post on 2 August, explaining how he had personally decided not to use that particular picture because it would be "exploitative and gratuitous" (see extract, right).

Richmond originally posted a picture of "White Tee-shirt", so his replacing it with this one, after he was soundly trashed on his own blog – seems to his rather sick way of getting in the last word. Interestingly, the picture he has chosen is the only one which Deborah Howell of The Washington Post - in an article of 13 August - was prepared to admit was staged.

Well, we shall see what the Press Complaints Commission thinks of Richmond's sick little game. However, this is a notoriously weak watchdog and it has complete discretion as to whether it entertains a complaint, but it is worth a try.

In the meantime, I will be closing down the existing thread on the forum headed "Green Helmet/AP", and opening up a new one linked specifically to this post and the report.

Normal service will be resumed in the morning, and this time I mean it.