An industry in denial 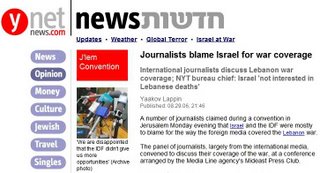 A number of people thought I was a little hard on the media yesterday, in my post headed, "The scum that they really are". To an extent, they are right. Not all journalists are scum. There are some fine people in the trade who do their best – within the limits they have to work – to do a diligent and professional job.

However, in an industry that is so tainted, their individual output must be measured by its overall effect. Thus, all the practitioners must bear the burden of that taint.

But quite how bad the situation is, I scarcely imagined. This is brought home by an article in Ynet News yesterday, headed, "Journalists blame Israel for war coverage".

The opening sentence has it that, "A number of journalists claimed during a convention in Jerusalem Monday evening that Israel and the IDF were mostly to blame for the way the foreign media covered the Lebanon war."

But what particularly stands out are the comments by Associated Press' Chief Jerusalem Correspondent, Ravi Nessman. He downplayed the Reuters doctored photo scandal, saying: "It was probably one guy… everyone's working very hard. Everybody is tired. Everybody is overworked. It's very unlikely that the photo editors sat there and said, these are doctored photos, get them on the wires… I'm sure it slipped through. They're trying to do as credible a job as possible."

Nessman also claimed that "there was one real photo scandal in this war, and there were dozens of non-scandals that cropped up." This can only be a reference to the "Qanagate" staging, which stands at odds with a claim from Stephen Farrell of The Times who remarked that, "Pictures have been faked as long as there have been pictures." He cited "commercial imperative" as a factor in the doctored images.

Thus do we read Melanie Phillips today in her article headed, "The media war against Israel". Her long and well-argued piece is worth reading in full but especially chilling are her conclusions. "To date," she writes:

…as far as I can determine, not one mainstream editor or proprietor has acknowledged this corruption of the western media. The scale of this corruption now threatens to have a lethal impact on the course of human history. Hatred now drives not just the jihadists but their western dupes, too. Truth and freedom are indivisible. The deconstruction of the former inevitably presages the destruction of the latter. This is the way a civilisation dies.

To now turn to a piece on the BBC website concerning EU action over Polish shipyards might seem a complete digression, but – as I will show – the inadequacies of this report are all part of the same phenomenon, the corruption of the media.

Written by Jan Repa, styled as a "BBC Europe analyst", this records how the EU Commission has presented Poland with a deadline of the end of the week to "present credible plans for the future of its Baltic shipyards." If it fails to do so, the shipyards could be forced to hand back large amounts of state aid, which the EU Commission says contravene EU rules. This will almost certainly result in the closure of a number of the yards, including the former Lenin Shipyard in Gdansk - birthplace of the Solidarity movement.

The article itself is a fairly factual piece of reporting – but the situation has been developing for some considerable time. The shipyards have been under investigation by the Commission for more than two years.

Where the "corruption" comes in, therefore, is that this issue is treated in isolation and has not informed the coverage of other issues which are directly related.

Not a week ago, I wrote a piece called "The enemy between", where I pointed out how superficial has been the coverage of the Polish mass migration in the media.

Not only was it inevitable and predictable, I wrote, one of the reasons I gave was that:

Here, in this BBC report, we have graphic evidence of that dynamic – but no one joins up the dots. Where you have an economy that has failed to develop – through the dead hand of Communism and Russian occupation – to expect it to then immediately to conform with all the norms and regulations of the far more advanced and mature western economies is asking for trouble. The net effect, as we have observed, is mass migration.

The point her is that in all the huge amount written recently in the media about the "Polish problem", nothing of this has been aired. The trivial, superficial and wholly inadequate discourse betrays a massive failure on the part of the media, a total lack of professionalism.

In discussing media issues with my colleagues, in and out of the trade, we see this as all part of the same quantum. It is difficult to distinguish, sometimes, between bias, incompetence, laziness and sheer lack of professionalism. But, in the round it does not really matter. It is corruption in the sense that we apply to word to computers – a "corrupt disc" or a "corrupt file" – something which has broken down or deteriorated to such an extent that it no longer functions as it should.

What the Ynet report indicates, though, is that the problem is far worse than we imagined. Not only is the western media corrupt, it is nowhere near acknowledging that it has a problem, or that there is anything seriously wrong.

For our part, we need to appreciate that, while the Middle East reporting showed up the fault lines in a spectacular fashion, the more pedestrian inadequacies evident in reporting elsewhere, on a wide variety of issues, are all part of the same disease. Basically, the media can no longer be relied upon as a purveyor of information or reliable analysis and, as long as it fails to recognise that it even has a problem, there is no immediate prospect of improvement.

Inasmuch as there are people in that industry who wilfully refuse to accept just how corrupt their industry has become, I stand by my original epithet, although I will add that the issue is the corruption of the industry as a whole. But that merely highlights the more immediate problem - we have an industry in denial.