"Don't preach to us" 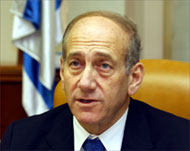 In an interview with Welt am Sonntag, as reported by Al-Jazeera, the Israeli Prime Minister Ehmud Olmert dismissed European criticisms of Israeli treatment of civilians in Lebanon:

“When asked about criticism from European capitals of Israeli military operations that have led to a heavy civilian toll, Olmert said: "Where do they get the right to preach to Israel?

"European countries attacked Kosovo and killed 10,000 civilians. 10,000! And none of these countries had to suffer before that from a single rocket.

"I'm not saying it was wrong to intervene in Kosovo. But please, don't preach to us about the treatment of civilians."”

His figures of the Kosovo death toll are somewhat askew. 10,000 civilians were not killed in that last phase of the war that had begun in 1989 and certainly not by NATO. But his point is entirely reasonable. Civilian casualties have happened in every war and, on the whole, they have been very low in Lebanon this time round. And that is not even going into the whole argument of who is and who is not a civilian in a war in which a uniformed army is facing attacks from an enemy that does not make itself known.

One more point to be made that the European critics might like to take into account. Hezbollah fires rockets into Israel without warning but the Israelis ensure that families, as far as possible, are protected in bomb shelters.

Israel issues warnings of bombings but neither the Lebanese authorities (though, one must assume, they are not in charge in many of the southern areas like Tyre and Qana and not always in Beirut) nor Hezbollah bothers to ensure that civilians, especially women, children and old people, are hidden in shelters.

There is, therefore, a higher casualty rate in Lebanon. Could we have a comment from the European politicos and media, please?