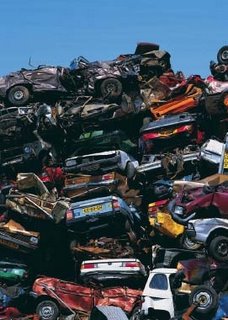 Yes, having a go at the Beeb is like shooting fish in a barrel, but à propos my earlier post about media bias this is too good an example to ignore.

The subject in question is scrap cars and, we learn from the Beeb that, "Scrap cars [are] creating toxic waste", a report earnestly broadcast last night on The World Tonight and repeated on the BBC website .

The main claim of the report was that: "As many as 1.5 million cars are being scrapped illegally in Britain every year, presenting a major environmental hazard," pompously announced in that self-regarding way the media does, as "the BBC has learned".

Thus does it continue that: "Thousands of tonnes of toxic waste are being created by drivers who fail to dispose of their vehicles in the way demanded by the European Union."

This is the notorious End of Life Vehicle Directive, on which we have written occasionally, as indeed did the The Daily Telegraph last year, both of us pointing out how the legislation was an unmitigated disaster.

But such faint-heartedness is not for the Beeb. If it is EU law, then it can only be spoken of in terms of approval. So do we get a brief description of the Directive, with the Beeb telling us that, "In 2003 the European Union introduced legislation requiring all cars coming off the roads to be taken to an approved site, cleaned of pollutants, and the owner issued with a certificate of destruction."

From this, you immediately see where the Beeb is coming from: the munificent, caring EU has delivered unto us with wonderful law which protects us – and the sacred environment – from the depredations of irresponsible and polluting car owners. How lucky we all are.

But, instead of being grateful, according to the Department for Trade and Industry, two million cars were scrapped every year, but by the end of June this year only 250,000 had received a certificate of destruction. And, according to "industry experts" (unnamed - could be the caretaker at a scrapyard, for all we know) this "meant 18,000 tonnes of vehicle fluids and the same amount of batteries could be being dumped or poured down the drain every year."

Then we get Lib-Dim MEP Chris Davis, supporting the Beeb line. The situation was starting to get out of control, he said. "We have some really useful European environment legislation, designed to ensure that we deal with this huge mountain of scrap cars in a responsible manner. It's been British law now for the best part of three years, but the arrangements simply aren't working." He thus burbles on:

Either the government has got to join departments together and get these changes made, or we've going to have to ask the European Commission to take Britain to court and make sure that we're protecting our environment properly.

Then we get an interesting little tailpiece, which the Beeb retails, but doesn't understand. It cites "legitimate operators such as Jeff Bridges" who are struggling to compete with the illegal car-breakers: "You've only got to pick up the local paper, turn to the back page and there will be dozens of adverts with mobile numbers to remove your vehicles. And we can't compete with that", says Bridges. He adds:

We obviously have overheads, we have legal obligations to fulfil, whereas they are just one man with a lorry who will go along and take the vehicle away - untraceable, unprosecutable.

And there, in all its glory is the reality of a totally unworkable law. You create a morass of paperwork, regulation and controls which make it so expensive and onerous to dispose of a car that the business simply goes underground, and 1.5 million cars disappear from the system. Quelle surprise!

It is here that the Americans have really got it right. Instead of devising an onerous bureaucratic scheme – in which the EU excels - their government has created a tax-break for the disposal of cars, where anyone donating a wreck to a charity can deduct the notional value of the car from their taxable earnings statement.

This has spawned a massive charitable endeavour, with a whole range of websites, such as here, here, here and here. As a result, car disposal is much less of a problem in the USA than it is in the UK, with the Americans having harnessed the power of tax incentives to the might of the charities, utilising market mechanisms.

But, as they say, love is blind.