The lies they tell… 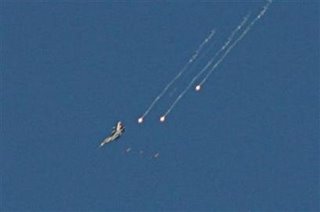 Little Green Footballs is having a whale of a time with the news that al Reuters has suspended its photojournalist Adnan Hajj (he of Qana fame) after he had (rather badly) photoshopped a photograph of a bombing raid on Beruit, to increase its apparent severity.

There is a good forensic evaluation of the techniques used, here, and a discussion of the broader implications, while journalism.co.uk runs the media reports.

But it is the comment section of this site that there is buried gold. Per Thulin tells us that he has found another altered image by Adnan Hajj (pictured above left). This purports to show an IAF F-16 firing a salvo of missiles at a (presumably) Lebanese target. But, as the sharp-eyed Per observes,

one has three identical smoke trails (top half) from rockets. Two of the rockets are therefore added. 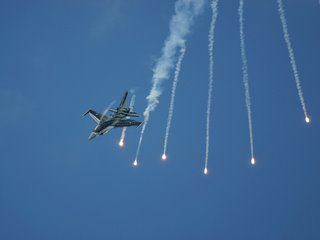 Actually, he has only got half the story. The smoke trails and bright points of light are not missiles at all. They are decoy flares, fired off as a defence against infra-red guided missiles. Firing these is a star turn for aircraft at airshows, and here is a picture (right) of a Dutch F-16 showing off. Below left is another aircraft doing the same thing – this one an F-18 Hornet. 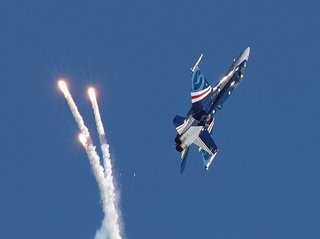 You will see from these pictures that the flares are fired as a spread, not parallel, to give wide area protection. Thus, it looks as if Hajj has taken one trail, copied it and then placed the three, parallel identical trails under the aircraft to make it look as if it is firing missiles.

But that is not all. If you look closely in front of the trails that Hajj has inserted, you will see that he has also inexpertly added three solid objects, purporting to be the missiles themselves. However, missiles do not look like that. Below right you will see a picture of an F-16 firing an air-to-ground Maverick missile, typical of the type used by the Israeli Air Force. Hajj's pictures look nothing like this and, furthermore, these are never fired salvo. You will only ever see them fired singly. 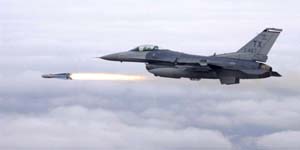 Meanwhile, Drinking from home has got his own example of picture fraud from al Reuter's Issam Kobeisi.

But remember people – these are examples of picture fraud, which can be detected. The captions which the journalists supply can also be fraudulent, but no amount of forensic examination will pick that up. But, if they're rigging the pictures, how can you possibly trust the words?

It looks like al Reuters has got a whole lot of explaining to do – and that's just the start. The other agencies are also in the frame. Perhaps they could get Shane Richmond to do an investigation.

And no, we have't finished our evaluation of Qana. Some more sequencies to follow as soon as we can.

Jawa Report also does the "missile" story.
The Shape of days does a forensic analysis.