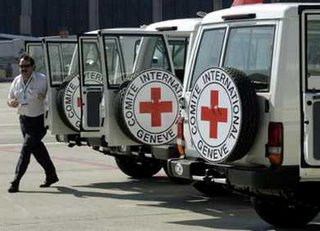 It is a given – or used to be – that in the fields of conflict, the one organisation that could be relied upon for its impartiality and dedication to humanitarian values was the Red Cross, whether the umbrella organisation, the International Red Cross or the national organisations which used the name.

And, as the fighting intensifies in Lebanon, the Red Cross is highly visible, sending ambulances and vehicles to the region, while its uniformed aid workers are to be seen everywhere in south Lebanon. They were highly visible at the Qana incident, in their orange overalls and white helmets with red crosses. 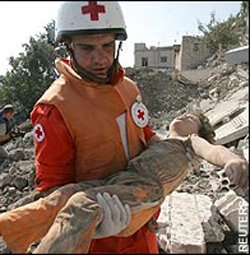 The assumption of impartiality was certainly relied upon by no less than the vacuous Shane Richmond who, in laboriously explaining to us how he chose a photograph of the Qana incident to illustrate the Daily Hezbolagraph website, showed us the picture on the right. This one, he intoned,

…shows a rescue worker carrying a child's body. The worker is displaying no emotion. He's a professional doing his job. Perhaps the emotional impact won't hit him until later, perhaps he has simply learned not to show his emotions. Whatever the reason, his lack of reaction means that our attention is directed wholly towards the child's body.

Instead, Richmond chose the staged picture of White Tee-shirt in full emotional flow, explaining that in this one, the man was reacting "very emotionally to what is happening". Thus, wrote the fount of all wisdom, "not only does that make for a more powerful picture but it also takes some of our focus away from the body".

But, it now transpires, had he opted for the Red Cross worker, Richmond would simply have gone from one stage-managed picture to another. Far from being a "professional doing his job", this was simply another actor in the grotesque production set up for the benefit of the photo-journalists who had gathered to record the disaster. 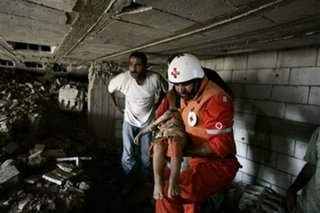 To see how this played out, we must go to the sequence at the start, where the body of the girl in Richmond's picture - clad in orange pyjamas - is recovered from the wrecked building. We see this in the photograph on the left, where a bearded Red Cross worker is handling the body, with "White Tee-shirt" in attendance although, in this scene, not taking a great deal of interest. 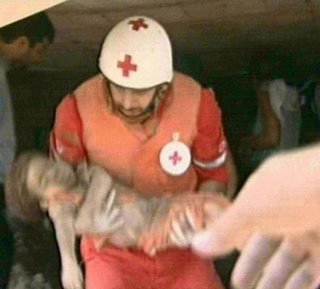 In this next frame, a video grab from the Aljazeera news footage, we see the same Red Cross worker emerging from the wreckage to the outside, still carrying the body of the same girl. The hand in the right-hand section of the shot indicates that someone is reaching out to take the body. In the top left corner can be seen the edge of the collapsed wreckage - a pale peach colour. This is an important reference point which we will see again in other frames, providing a marker by which we can judge positioning. 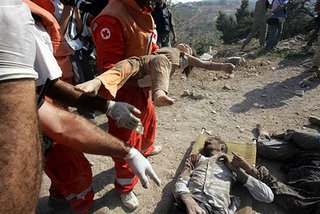 The video record is now stopped, so we cannot see precisely, from this source, what happens next. But we do see a still photograph (left), which shows a Red Cross worker holding the dead child, with the arm of another person gesticulating downwards (body out of shot) indicating - it seems - that the body should be positioned on the stretcher in view, already occupied by another body. The inference from this shot is that the body of the child is about to be placed on the stretcher. Of interest here, incidentally, is the number of photographers in view, plus a video camera operator. 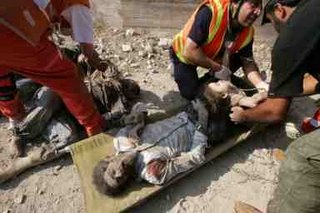 Although we do not actually see the body being placed on the stretcher, it seems the inference is correct because in this photograph we see the child's remains in place. The scene actually shows a very familiar character, "Green Helmet", and a companion in a black baseball hat. This type of hat is often the badge of Hezbollah and we see this man in many frames elsewhere, apparently directing operations and giving what seem to be orders.

There is some ambiguity in this frame, as to what precisely is happening - whether the body is being placed or lifted - but, if we assume that it has already been placed by the Red Cross worker, then the logical inference is that "Green Helmet" and "Black Baseball Cap" are lifting the child up, off the stretcher.

Now we must digress slightly to show the normal evacuation route for casualties laid out in this area. This we can illustrate from video footage taken from Arab TV, showing a Red Cross worker carring a different body. As can be seen can be seen from the video and a composite of four "grabs" shown left (double-click to enlarge), the route is straight down the hill to a corner, where the bearers turn left and then continue down a long road. (Eventually, they come to another corner, whence they turn left again which brings them to "Stretcher Alley".)

Returning to the girl in orange pyjamas, we find her body in the arms of a different Red Cross worker - and there is something odd about the location. The worker is, in fact, down the hill from the opening of the wreckage from which the body was recovered but, instead of turning left round the corner, he has turned right, to stand on a pile of rubble. In this, the first frame of the Aljazeera footage, we catch him stationary, looking down to his right, evidently under the direction of the photographer closest to him. Note also the other cameraman (extreme left), the two behind him and the one in the centre of the frame, partly down the hull. Red Cross worker is obviously at the centre of a stage photo-shoot.

In this next "grab" taken from the sequence, we see Red Cross worker again, still under the direction of the cameraman closest to him stride purposely forwards, providing ample opportunties for a series of shots showing off his trophy. The resulting picture, from the angle, must be the one rejected by Shane Richmond, shown at the beginning of this sequence, which means we are probably seeing one of the Reuters photographers.

Then, as the Red Cross worker continues forwards, we see revealed yet another camera operative (this looks like a video camera), demonstrating the extent of the shoot. Note also, from this and the previous picture, the Red Cross worker has been set slightly down the rise, and is climbing uphill over the rubble. In this frame, he is about to step onto the level ground.

And here is our Red Cross worker again, this time taken by a still photographer. This time he is a few steps forward, well onto the level ground, still surrounded by cameras, and you can see from the background (with the peach-coloured beam) that he is just below the exit from the wreckage, from which point the girl's body was extracted.

Now we are back to the Aljazeera video footage, with the red-sleeved Red Cross worker. The video sequence shows he has entered the lane without turning, which puts his original location - where the photo-shoot started, opposite the lane. And revealed here is the figure of "Black Baseball Cap" who is acting for all the world like a stage director, giving directions and orders to clear the way so that the remaining photographers can get their shots. Is this Mr Hezbolla managing the scene?

Here, in the final "grab" I have taken from the sequence - although there is plenty more footage on the video - we see our man having moved on a few steps to reveal yet another photographer. To the right of Red Cross worker is yet another, and there is another worker up ahead. We see the two later in the video sequence joining up together, marching down the lane towards "Stretcher Alley" until they are out of camera-shot. 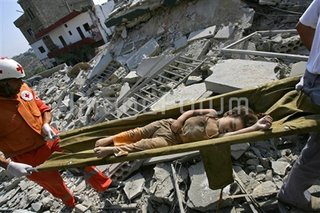 Between the point where visibility is lost and "Stretcher Alley", however, it seems that Red Cross Worker must have tired of his burden. As we see in the director's cut, the girl's body is transferred to a stretcher - uncovered for the benefit of the photographers, and transported up to "Green Helmet's" waiting ambulance. The first of the stretcher bearers could be "White Tee-shirt", but we cannot see enough of the man to be certain. 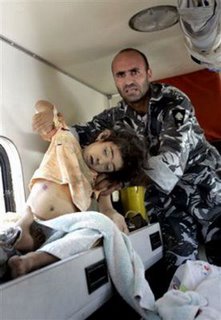 We know the girl's body is eventually placed in the ambulance because we also see shots of it being posed with a variety of other characters such as this one, in the uniform of a Lebanese soldier. We can also guess that this sequence came after "Green Helmet's" camera run, as the girl's body he carried is visible in other pictures.

This one is a particularly unpleasant picture as the man has the child by the scruff, treating it with less dignity than one would a rag doll. But, perhaps, this is no different from using the body as a prop by a succession of actors, all to gratify the needs of the photographers and their editors who so skilfully decided that they photographs they used were not staged. Somehow, though, that Red Cross workers, who do represent that long tradition of impartiality, makes the media's protestations seem all the more tawdry.

All of this, of course, is a million miles from the image that the Red Cross itself presents – the above, for instance, on the British Red Cross website as it appeals for funds for the Middle East. But one wonders whether the potential donors would be quite so generous if they realised that in the past (and possibly in the future) money given to the Red Cross was used, in effect, to create Hezbolla propaganda and to gratify the commercial needs of the media and their quest for pictures of the dead.