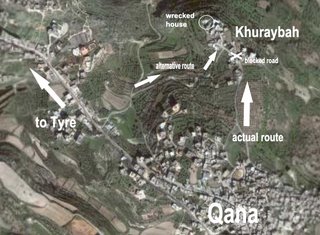 If the reasons for "Stretcher Alley" staying blocked remain unanswered, there is an even more bizarre mystery: there was more than one route into Khuraybah. Furthermore, the alternative by-passed the blockage and potentially allowed traffic, including ambulances, access right up to the wrecked house.

As can be seen from the satellite photograph (left), this route comes off the Tyre road (from which most of the rescue teams came) before reaching Qana, going direct to the hamlet (Double-click the image to see an expanded view of the road).

Whether or not that route was blocked, we do not know for certain. However, via Fred Fry, we see that the UNOSAT post conflict assessment (Inset #6), using the Ikonos Satellite, shows a large part of the road and no signs of damage. Perversely, there is one bomb strike on a road marked - on the main Tyre road a few yards north-west of the junction with the alternative route. If that had impeded traffic, it would have affected access to Qana from Tyre as well - from where "Green Helmet" and many of the rescue teams came. 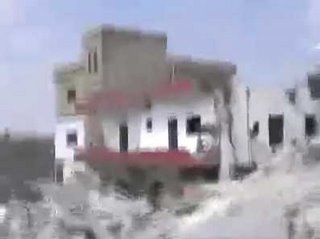 What is possibly significant, however, is the footage from tele-journalist Kevin Sites, whose journey to the wrecked site is recorded as he arrives some time after midday - possibly between 1 and 1.30pm. The quality of the shots is very poor as the camera is hand-held and the operator is running. But, in this frame, recognisable enough is shown the buildings opposite "Stretcher Corner". This positions Sites at the bottom of "Stretcher Alley". 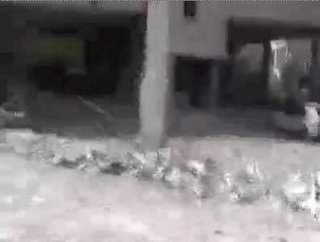 The camera then swings to the left as the operator takes the turning around "Stretcher Corner along the route which will eventually lead to the wrecked building.

The shot is included here for continuity, showing the damaged buildings recognisable - and the car to the right of the frame - as at the bottom of "Stretcher Alley". 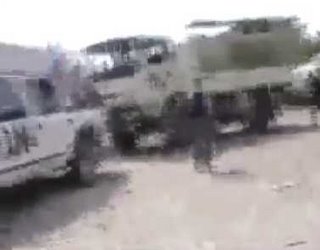 Now, as the camera swings round in the new direction, revealed are two vehicles, in UN markings and colours.

These are most likely part of one of the two convoys carrying UNIFIL medical teams from Tibnin and Naqoura, which arrived respectively at 10.15 and 11 am. 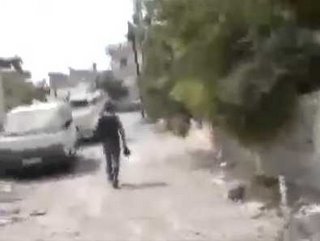 In this shot, the camera operator is now further along the lane, just past the truck. This is the same route taken by the stretcher parties, and "Green Helmet" and "White Tee-shirt" on their camera runs. We see another two vehicles, part of the same convoy - a van or people carrier and (although indistinct) an armoured vehicle - parked up alongside the edge to the road. 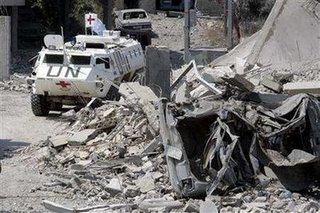 And this is the armoured vehicle type, a Finnish-built Sisu XA-180 armoured personnel carrier equipped as an ambulance. This, however, is parked just to the east of the lower end of "Stretcher Alley", the other direction from "Stretcher Corner". It may be one of the vehicles from the other medical convoy.

Now, the important point about these scenes filmed by Sites (or his camera operator) is that all the vehicles in the convoy are pointing away from the wrecked building and towards "Stretcher Corner". This is a convoy which, in the words of the UN press release, was sent "to provide medical and humanitarian assistance to the local population and the victims of the aerial bombardment".

Effectively, it was an emergency mission. It is seems unlikely that, on arrival, all the vehicles in the convoy should have turned round and parked facing the direction from whence the came. More logically, they would have parked pointed in the direction they had been travelling when they arrived. In other words, there is a possibility that they had taken the alternative route, rather than travel through Qana and down "Stretcher Alley". If that was the case, to be in the position observed, they would have turned right when they arrived at Khuraybah, before parking, for them to be seen in the position Sites records. 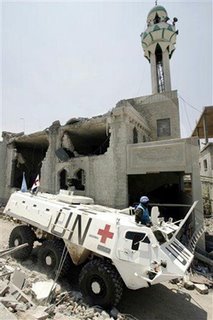 However, there is also this picture, taken by AP's Lefteris Pitarakis, which shows a UN Sisu XA-180 travelling down "Stretcher Alley".

While it is difficult to be precise, shadow analysis indicated the time to be shortly after 12 am. Therefore, the vehicle could belong to either of the two UN medical convoys, each of which could have taken a different route to Khuraybah. Tibnin, is to the east of Qana while Naqoura is to the south-west, on the coast. See map here.

Thus, the two convoys would be expected to take different routes and, for the Naquora convoy, going through Qana would be the most direct route. 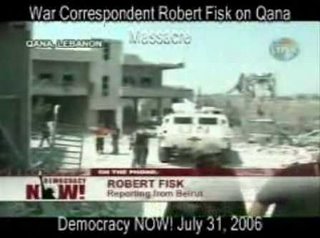 We also see here another picture of a Sisu XA-180, positioned at the bottom of "Stretcher Alley", facing up the hill. One possible explanation for this and the previous shot is that the vehicle was being used as a shuttle, delivering casualties to the ambulances at the top of the hill. In that case, the picture above could be the vehicle on a return journey.

What is very evident, though, is that - by this time - the road has been cleared. We also know, however, that through the course of 30 July a variety of plant reached the wrecked building. First, there was this JCB-type equipment, which was at the site during the "dead baby" display. We do not know how or when this equipment arrived, but it could already have been on the site, or been driven from a close by under its own power. It could have been this equipment which was used finally to clear the road to the standard we see in the picture of the Sisu on "Stretcher Alley". 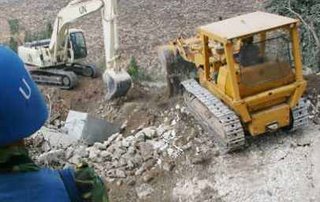 Following this vehicle, additional plant arrived, a UN tracked excavator and bulldozer. These would not have come under their own power but on the backs of low-loaders. They arrived with a team of Chinese engineers who would have had additional vehicles. This picture shows the equipment in use at the wrecked building which confirms, if it was needed, that the roadway was wide enough for vehicles such as ambulances to travel. 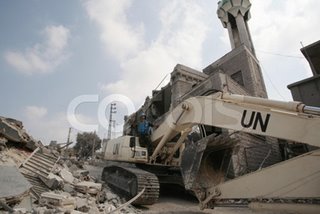 And we now have a photograph of the tracked excavator arriving. It is shown travelling down "Stretcher Alley", on a road that is completely clear of debris.

There is a problem here, though. Once it turned left past "Stretcher Corner", it would have - presumably - been confronted with the parked convoy seen in Stiles' footage, on a lane which looks scarcely wide enough for it to have passed. And if the excavators managed, it is unlikely that the bulldozer would have got through. Without doubt, it did - so there may have been some interesting manoeuvring of vehicles. 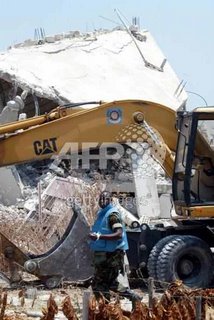 Finally, there was a wheeled excavator on site, a large piece of plant which, equally, had to gain access by some route or another. It would also - most likely - have been brought to the site by a low loader. Its passage was not recorded via "Stretcher Alley". And, while the markings on the digger arm suggest is it UN equipment, its presence on site is not mentioned in the official reports.

All of this, therefore, leaves completely unresolved the issue of whether the alternative route was open. The route could have been open and, if it had been, it would have been the logical way for "Green Helmet" and his team to have come. One source which could tell us what went on is the UN, but it has been unhelpful on this matter. We are, therefore, unable to pursue it further at this time.