So it goes on… 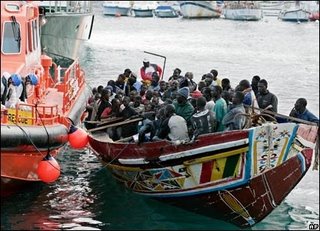 If the mistakes governments make are not publicised and analysed, there is no accountability. Nor then will there be any popular pressure to put matters right. The result, in this case, is that people are dying.

That is the measure of the failure of the media as it records, yet again, the surge in illegal immigration from West Africa to the Canaries in small boats across the perilous Atlantic, the Guardian, amongst others, reporting, "15 Bodies Found on Mauritanian Beach", believed to be would-be immigrants washed ashore after a failed attempt to reach the Canaries.

As we detailed in May, here and again here, the forced migration is almost entirely due to the collapse of the artisan fishing industries in Mauritania and Senegal.

This is in very large part due to the predatory EU third country fishing agreements exacerbated by the EU's failure to assist in developing effective conservation systems and enforcement measures to deal with non-EU fishing vessels which are also raiding the fishing stocks.

To be fair, on 27 May, The Daily Telegraph did point this out but that was just one article of hundreds – yesterday's fish and chip wrapping, long gone.

Dealing with the current crisis, with numbers having exceeded 19,000, an article from UPI today records the disaster in terms: "EU steps in to stem flow of migrants", the BBC headlines: "EU promises help with migrants" and Reuters (of Adnan Hajj fame) proclaims: "EU states urged to help Spain stop African migrants".

Now, you might say, the coverage cited – and much more – is perfectly neutral, recording simple fact. But that is precisely the point. Imagine, for instance, that the Canaries crisis was due to the action of Israel, or some other non-favoured entity. Do you think that the headlines would be so studiedly neutral? But, because the EU is involved, we get strictly factual reporting. 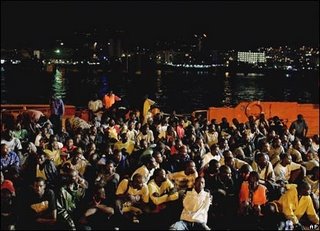 It would be just as accurate, for instance, to write a headline declaring, "EU fails to stem migrants". Equally, the copy could just as easily make reference to the "crisis caused by the EU's fishing policies in Africa", and it would be entirely factual to state that Spain – which is so voluble in appealing for help, and on whose behalf the EU is calling for help - is the main beneficiary of the fishing policy.

But, while pejorative references are prevalent in virtually every report about Israel's actions, you will not find a hint of censure directed at the EU in any of the copy produced on the Canaries issue. It is in that way, mainly, that bias operates. In the case of the EU, it is not what the media say – it is what they leave out that makes the difference.

So, the betting is that, after reading the story in whatever media outlet they prefer, the bulk of ordinary, intelligent people will conclude that the EU is a beneficial organisation, struggling to assist a member state deal with a sudden and unavoidable humanitarian crisis. And if they do, they will be wrong.

But the reason will be the misinformation – and the lack of information – that dogs this issue. Thus do we aver that the single most important obstacle we confront in trying to deal with the EU – and so many other issues – is the media.