It's all the same war!

See here for our post, "Qana – the director's cut". 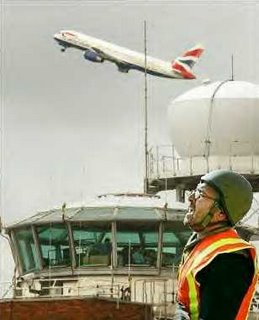 The news will, quite rightly, be dominated by the airline bombing plot, and we will see wall-to-wall coverage of this. However, as we remarked earlier, there are two wars going on out there, "the shooting war" and the propaganda war. Already, Al Beeb has had a faux "security consultant" on the screen, declaring that the reason for the bomb plot is that our "aggressive" foreign policy has made us a "target" for terrorists.

The inference, which will be seized on by the "anti-war" rabble, is that if we pulled all our troops out of Iraq, Afghanistan and elsewhere, all those nice little Moslem terrorists would leave us alone and go and slaughter some other poor, innocent victims (like in Madrid?).

In this context, therefore, exposing the Qana staging is as much part of the "war on terror" (albeit a small part) as all the many other activities against the terrorists. With its friends and fellow-travellers in the media, Hezbolla has shown itself adept at fighting the propaganda war and its activities here can negate the more solid achievements on the other fronts.

With that in mind, we will continue - for as long as it takes - exposing the lies and distortions of the propagandists, to which effect we post here a rough translation of the Stern article, which we flagged up earlier:

According to Conspiracy theories in the internet, the massacre of Qana found international attention just because the Hezbollah skilfully exploited the tragedy. During the Air raid on the south-lebanese village of Qana died according to latest figures 28 people. The house where they sought shelter had collapsed after being hit by a bomb.

Bloggers now state that a rescue worker who is being seen on many pictures is not a rescue worker but a public relations professional of Hezbollah. "Stern" printed a picture of the Lebanese last week, too. The man, who is nicknamed "Green Helmet" by the blog community because of his green helmet, wasn't there to recover children, but to present the dead bodies to the cameras. As evidence they state he ran across the scene with the same child for more than one time. An important indication for conspiracy theorists is that pics of him with an identical corpse were shot at different times. 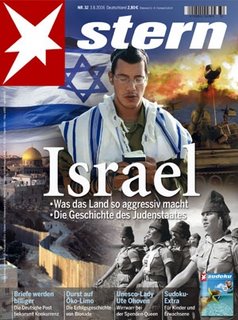 The time evidence is nothing but that. The pics have not been shot at different times – the photographers just submitted them at different times via satellite to their agencies. None of the photographers or journalists present had the impression that they were part of a Hezbollah staging. Nick Blanford, working in Lebanon for twelve years for London Times and Time and one of the first on the spot says: "The Red-Cross people carried the bodies out of the basement one after another. In the beginning, the ambulance had no chance to get to the destroyed building. The rescue workers had to carry the bodies over a distance of 500 metres. That's the reason there are so many pictures of rescue workers with children in their arms."

Tim Fadek, working in Qana for picture press agency Polaris, did not see evidence for a staging. "Everybody was upset, it was quite chaotic. When they carried the bodies out of the basement, the workers themselves were finished. When they held a body to the cameras, it was nothing of a pose, but sheer distress and anger: look what they did to our children!"

"Green Helmet" is called Salam Daher. He is 38 years old, lives in Marjayoun, has three sons and has been working for the Lebanese civil protection agency for ten years. He is not a member of Hezbollah. Usually, he helps with forest fires, car accidents or other catastrophies. He was informed of the Qana incident one o'clock in the night, but he wasn't able to get there before seven o'clock in the morning, because Israel's warplanes shot at the roads. Being asked by Stern of allegations of having staged everything, he said: “That's ridiculous. I pulled more than ten children out of the remains, I was close to breakdown in the end. There were photographers everywere, you nearly couldn't work. Once I held a child into the lenses so everybody was able to make a shot – but just to get rid of them and continue my work.

The bloggers see it as an indication that Daher was being photographed with a dead child in his arms ten years ago after an Israeli air raid on an UN refugee camp in Qana. It was April 96, recalls the rescue worker. More than 100 died then. "In the wreckage I found a small child without a head. At first glance I thought it was a puppet. When I recognized it was a human body, I was shocked".

Meanwhile, the rumors spread. The Hezbollah trapped the victims of Qana in the basement, some blogs are writing, quoting anonymous sources – and with a second explosion they made the building collapse eight o'clock in the morning. Bizarre, say rescue workers who were actually there.

But where does this conspiracy theory come from?

Eureferendum.blogspot.com is one of the most active sites in this field. The author, a brit called Richard North, is a former RAF-officer, ex-consultant and today "political analyst", according to his own words. As a freelancer he publishes books critical to the European Union. In addition he is member of the conservative think tank "The Bruges Group". He doesn't deny his sympathy for Israel. When he was young, he lived in a kibbuz for a couple of months. "Media is always alleging they were independent", he says, "but I don't think this is possible. I for myself admit it: I am not."

Meanwhile, we have been sent the "Zapp" footage, which shows Green Helmet acting, quite overtly as a stage director. We'll post on this later today, in with other developments.