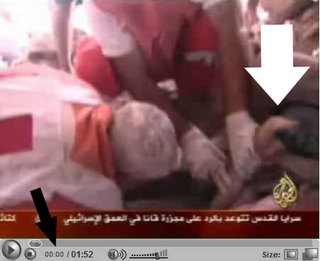 Blink and you miss it... the very first frame (black arrow indicates the time) of a video report by Mazen Ibrahim on the Aljazeera channel, commenting on the coverage of the Qana "massacre" in western media. But it is quite definitely there and, equally definitely it is the body of a baby.

This is in the first stages of the rescue/recovery operation at Qana and, if there is one thing all the media reports agree on, it is that there was only one body of a baby recovered - and here is the recovery, by Red Cross workers.

The baby, as far as we know, is Abbas Ahmad Hashim, 9 months old, and the video record certainly meshes with the account by Tim Butcher in The Daily Telegraph of 31 July. He writes:

Yet, late in the afternoon (we know it is afternoon because UN troops are on site, and they did not get there until late), this photograph is taken. It is shot by Reuters' famous Adnan Hajj, the man who subsequently was found out doctoring photographs of the Beruit bombing and the F-16.

There was always something deeply suspicious about this picture - it looks obviously posed, and then there is the curious, even consistency of the dust in which it it buried, with no rubble and large pieces of debris around it. There is also the mystery of the apparently clean "pacifier" and, even more remarkable is the way, when Green Helmet takes the body out to parade it to the media, the dust shakes off the body (see here). Initially covered in dust, by the end, it is almost clean. Surely, some should have adhered to a live, sweating baby, buried by such an avalanche, and remained on the body after death. 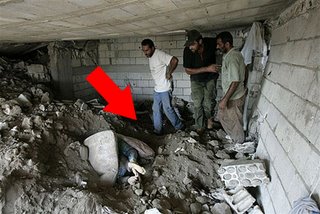 But most curious of all is the positioning of Green Helmet's "discovery". As far as I can make out, cross-referencing Hajj's photograph with other frames and video footage, the location is roughly where indicated by the arrow in the frame (left). This area is trampled over by inumerable workers, cameramen and others, yet no one noticed a buried body until the afternoon?

So, was the body planted, ready for Hajj to come in and photograph it for the world? Would he do a thing like that?

Well, as we know from photographer Bryan Denton:

...I have been witness to the daily practice of directed shots, one case where a group of wire photogs were choreographing the unearthing of bodies, directing emergency workers here and there, asking them to position bodies just so, even remove bodies that have already been put in graves so that they can photograph them in peoples arms.

A man like Adnan Hajj who so carelessly doctors photographs would, it seems, hardly demur at a minor misdemeanor of photographing a staged scene like this.

Methinks Reuters have still got some explaining to do, as have the other agencies who are trying to bury this issue (no pun intended). The evidence is here for all to see and, at the very least, there are good grounds for suspicion that the "dead baby" was "planted" as a precursor to the grotesque photo-shoot that followed its supposed discovery.

Comments - use the "Green Helmet/AP" thread
Posted by Richard at 12:05