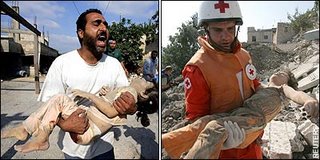 It seems that when little Shane Richmond gave us an earnest lecturette on how "responsible" newspapers like his own Daily Hezbollagraph selected "disturbing pictures" to illustrate both paper and website, he was not adverse to doing a little photo-manipulation of his own.

Demonstrating how and why the choice was made, he puts up two photographs, the right-hand one being the one of the Red Cross worker, who is rejected because he is not emoting enough.

Now, if you look to the left of the worker, you will see part of a figure in the background, indistinct and easily ignored. But, if you look at the full framing (right), as supplied by Reuters, you will see the whole figure. From this, it is clearly evident that this is a press photographer which, of course, little Shane would not want you to see. Thus it is, he has cropped the picture rather tightly, to ensure than you focus only on that which he wants you to see – "a professional doing his job". 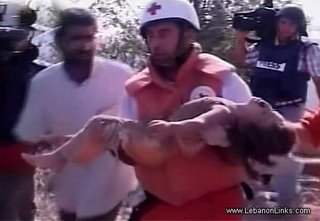 Needless to say, little Shane did not realise that this photograph had also been staged – not that he bothered to find out – and nor did he realise that the scene had been enacted twice, with two different workers. The opening sequence of "scene 1, take 1" we have already shown you, here, but we have now found an out-take of "scene 2, take 1".

And who is standing next to our compliant Red Cross worker, seemingly giving him stage directions? Why, our old friend Mr "White Tee-shirt" (Correction - a WTS "clone" - using a cloning tool?). "Green Helmet" and "White Tee-shirt" must have been busy elsewhere, staging their own photographs.