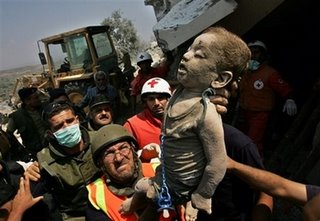 Well, I never. The news agencies that stitched up the photos at the Qana site have all huddled together and got AP staff writer David Bauder to issue a story rebutting lil ol' EU Referendum. And the imaginative title? "News agencies stand by Lebanon photos".

To engineer this massive intellectual feat, Bauder – who contacted this site asking us to ring him in New York at our own expense to answer his questions, but did not respond to our e-mail offering this blogger's telephone number – relied on the one post, but clearly did not bother to read the others, and particularly the latest, which already anticipated the points he was to make. 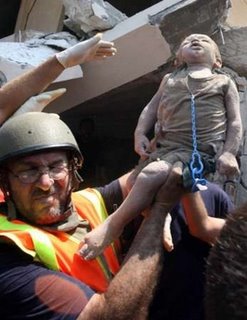 Thus does Bauder concentrate his fire on the one point of several, where he claims this site rests its case of "chicanery" on the part of the agencies on the "time stamps" that went with captions of the photographs. Laboriously, he details the timings, and then sets outs our case, that the events depicted were staged for effect, "a criticism echoed by talk show host Rush Limbaugh when he directed listeners to the blog on Monday."

"These photographers are obviously willing to participate in propaganda," Limbaugh is cited as saying. "They know exactly what's being done, all these photos, bringing the bodies out of the rubble, posing them for the cameras, it's all staged. Every bit of it is staged and the still photographers know it." 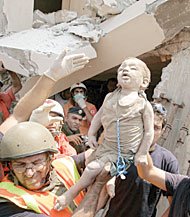 The "straw dog" thus set up, AP's Bauder then sets about rebutting it, declaring "information from its photo editors showed the events were not staged, and that the time stamps could be misleading for several reasons, including that web sites can use such stamps to show when pictures are posted, not taken." Note, however, the use of the word "can". He does not say that the "date stamps" are wrong.

Nevertheless, an aggrieved "AFP executive" is then wheeled on, saying, "he was stunned to be questioned about it." The MSM being questioned? Shocking, I tell you, shocking! 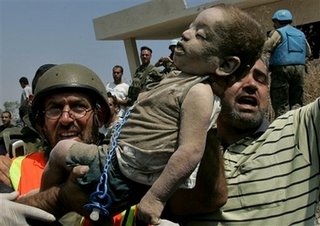 Then al Reuters is brought into the fray. In a statement, it says that it categorically rejects any such suggestion and then Kathleen Carroll, AP's senior vice president and executive editor, puts the boot in. "It's hard to imagine how someone sitting in an air-conditioned office or broadcast studio many thousands of miles from the scene can decide what occurred on the ground with any degree of accuracy," she says. 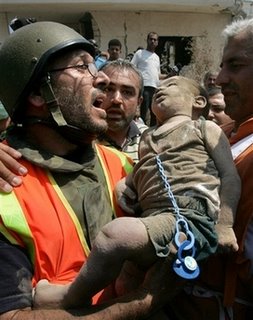 But Carroll hasn't finished yet. "In addition to personally speaking with photo editors", she says – who tell the absolute, unvarnished truth - "I also know from 30 years of experience in this business that you can't get competitive journalists to participate in the kind of (staging) experience that is being described." Photographers are experienced in recognizing when someone is trying to stage something for their benefit, she adds. 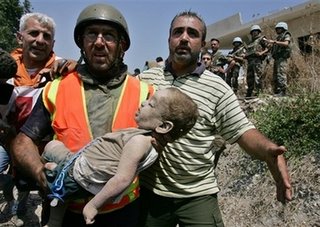 Now administering the coup de grace, Patrick Baz, Mideast photo director for AFP, is trundled up to the front. "Do you really think these people would risk their lives under Israeli shelling to set up a digging ceremony for dead Lebanese kids?" he asks. He is not "stunned". He is "totally stunned". And he "can't imagine that somebody would think something like that would have happened."

So, all the agencies are agreed - none of the photographs have been staged. Game set and match!

But then, you really have to give it to AP - they really know how to look after their staff. Thank you, Little Green Footballs. And this in the National Journal rather puts the claims into perspective. Anyone remember this gem from the NYT?