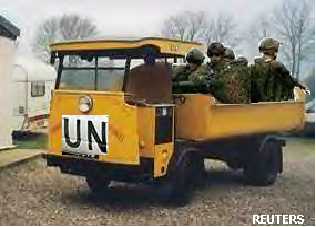 There is a serious madness abroad – both literally and figuratively – not least in DR Congo, where the high farce descends into low tragedy, the second round of the national elections breaking down into all-too-predictable violence.

This is where, of course, the EU army, was going to move in and sort things out – which is why it took 150 UN troops in armoured personnel carriers (pictured) to dash to the rescue fourteen UN and foreign ambassadors. They were meeting at the house of Jean-Pierre Bemba, one of four vice-presidents, who came second to the President in the vote – when a gun battle erupted in the vicinity.

The ambassadors had, it seems, been trying to broker a meeting between the two candidates who now face a run-off in the vast country’s historic elections, while shooting gunfire echoed around the capital for several hours. UN and European Union soldiers, we are told, "were placed on high alert" but – you will be surprised to learn - "did not intervene".

It was left to Jean-Tobie Okala, deputy spokesman for the UN mission in the country, to say: "We appeal to everyone to remain calm and respect the results from the vote." There's that word, "respect" again. Where have we heard it before, I wonder?

Analysts, according to The Times, have said that the United Nations, which has 17,500 peacekeepers in the country, "would have to act with unaccustomed resolution to prevent the run-off from spiralling out of control and returning the country to civil war," - which will never happen. That means the country is almost certainly doomed to another bloody bout of civil war.

Anyhow, one can only applaud the ambassadors on their choice of company for such a propitious event as a high-profile gun battle. Presidential candidate Bemba controls about 6,000 former rebel fighters, supposedly integrated into a newly constituted national army. His movement is accused of cannibalism after slaughtering pygmies in an attempt to inherit their magic powers and he himself was reported to the International Criminal Court for war crimes. Sounds just the sort of man we can do business with.

Mind you, if you want total madness, read this or even this.