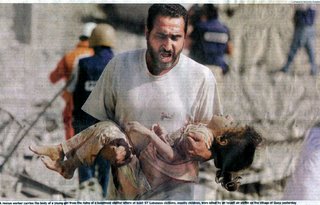 He is responding to criticisms from this blog that scenes photographed at Qana (and especially the one above, used by The Telegraph) were stage-managed. (The caption reads: "A rescue worker carries the body of a young girl from the ruins of a basement shelter..." and the photo credit goes to Lafarge Frederic/GAMMA.)

Dealing with the question posed as to whether the scene depicted on the front page of his newspaper was "staged", his specific answer was: "I doubt it." He adds, "The Telegraph picture desk - who are far more experienced in these matters than I - doubts it and the agencies who supplied the photographs have denied it. In the absence of a time machine, it's hard to know what else to do."

On the question of whether the emotion was genuine, that to Richmond is a "bonkers" question. "Are you suggesting photographers taking photos at bomb sites should question people they photograph to gauge how sad they are? Would they then correlate this sadness rating with the image somehow?"

Yes, he says, "we chose one picture over the other on the basis of its emotion, its power as an image. We do the same in bombings, earthquakes, people getting A-level results - even disappointed football supporters. Is this really a shock to you?" 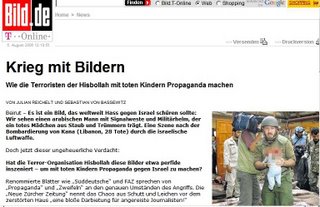 However, as to the conduct of the disaster site at Qana, it seems that BILD-Zeitung - Germany's biggest newspaper – is having no difficulty in deciding that "Green Helmet" is, as one of our German correspondents tells us, "a professional Hezbollah propaganda man". And, as is evident from our reviews, "Green Helmet" was very much in charge on the day. Thus is the piece headed, "How Hezbollah terrorists make propaganda with dead children".

Interestingly, BILD offers another photograph from the 1996 Qana disaster, and again we see "Green Helmet" in his classic pose, parading a dead child for the media to film. 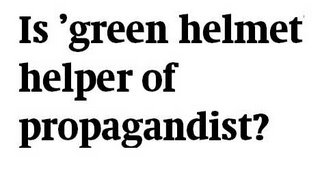 Also taking up the issue is Frankfurter Allgemeine Zeitung, which asks "Was geschah wirklich in Kana?", while the Dutch newspaper, Trouw asks, "Is 'Green Helmet' helper of propagandist?" The paper shows no less than 17 pictures of "Green Helmet" and, I am told, leaves it up to the reader to decide. The article ends declaring of "Green Helmet", "The only certainty is that the child he holds in his arms is dead".

It really is comforting to know that Shane Richmond is not troubled such issues, and he seems quite happy to use Hezbollah propaganda in his newspaper. And of course, what we think - his customers - does not matter. And airily does he dismiss this blog, citing the "one example" on the issue of the tee-shirt. This, writes Richmond, "raises a question about North's whole argument: was the whole thing a propaganda stunt aimed a tricking a gullible mainstream media? Were North's claims staged?"

Thus, we are meant to conclude, The Daily Hezbollagraph is perfectly in order. The picture was vital to telling the story and this Blog is wrong – on everything.