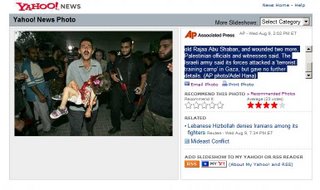 This picture and report from AP photo-journalist Adel Hana, "grabbed" from Yahoo, tells a tragic tale. The caption reads:

As so often, the caption defines the picture. In fact, the girl was killed falling off her swing, just before the raid. Read the full account on Little Green Footballs.

Meanwhile, the cracks are beginning to appear.