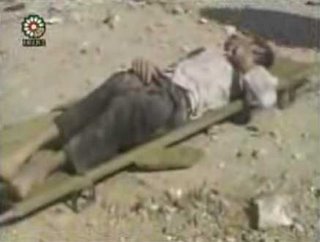 What you are meant to see is the first sequence, where the television camera lingers on the abandoned body of a man, a vignette pregnant with pathos, so laden with symbolism that even the hardest of heats could not fail to be moved.

But the Arab TV station which showed this scene was perhaps too enthusiastic for its own good. In a long clip, of over seven minutes, it then went on to show this separate sequence, starting at 6:45 minutes. 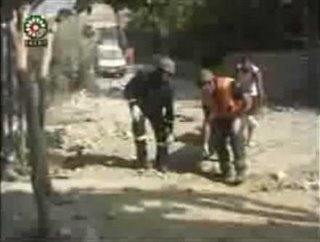 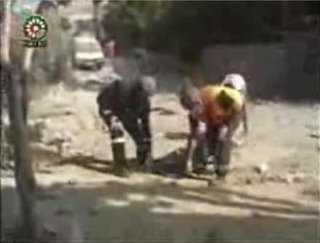 Thus we see the party lay the stretcher on the gound, "Green Helmet" all the time keeping his gaze on the camera. There is no verbal sound track to this film (it is overlaid with Arabic music) so we cannot tell if "Green Helmet" gives an order - not that we would have understood it anyway. But what happens next cannot be spontaneous. 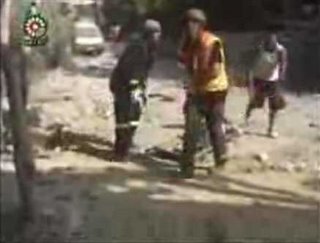 With extraorinary rapidity, the three stretcher bearers disperse. The "man in black", or so it seems, heads off at the run in the direction whence he came. The young man breaks left at high speed and "Green Helmet" heads at similar speed in the direction of the camera. The indications are - and the effect certainly is - that they are trying to get out of camera-shot. 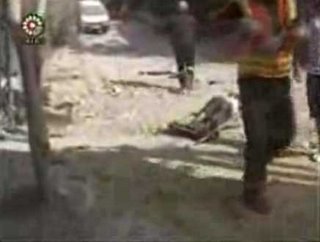 No more than a few seconds into the sequence and their high-speecd dashes are paying off. All the figures are now nearly out of camera-shot. The "man in black" looks as if he is about to run all the way back to the wrecked building - that is the direction he is going. The others, we cannot see as they run past the camera out of view. 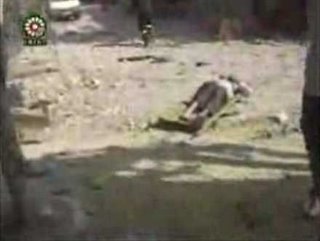 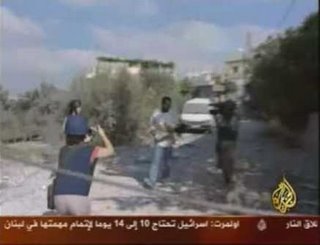 Context, of course, is everything. An innocent explanation would be that the stretcher party had arrived at its destination. The "man in black" was rushing off to pick up another body and the other two were rushing forward to take on other vital tasks.

However, we know exactly where this is, from the footage of "White Tee-shirt's" camera run. This is the middle of nowhere. It is some distance from the wrecked building and even the staging area, and well short of "Stretcher Alley" and the ambulances. There is no activity here. If for some reason "Green Helmet" and his team had suddenly tired and decided to take a rest, they would surely have remained with their burden. There can be no explanation for their behaviour, other than they are determined to get out of camera-shot to give a clear view of the body.

We've added this to our report in Part 7.